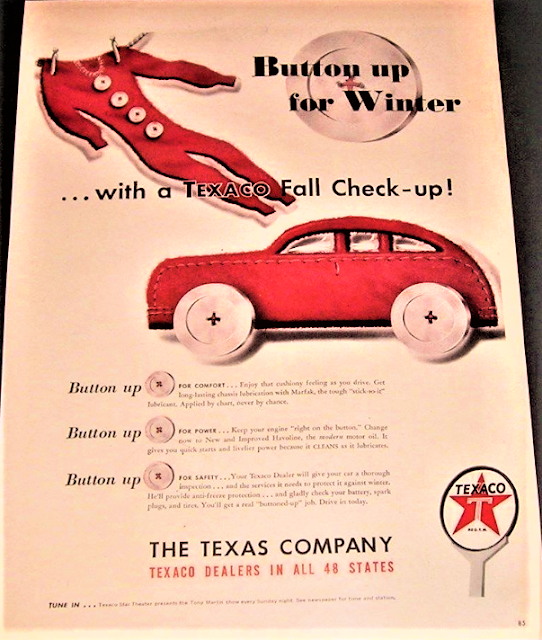 As this amusing, old-time Texaco ad suggests, it's time to tune up the old jalopy. Pull out and pull on your long-handle underwear if you haven't already, and get set for winter.

Just like checking your car's radiator to see if it has enough antifreeze, we Union Suit Fans should check our winter wardrobe to ensure we have enough long johns to make it through the cold, short days ahead.

Here in northern Idaho I've been wearing full body Union Suits for at least a month now and have had to close our bedroom window at night. It has gotten down into the 20's the last several nights and we have already had a few snow flurries. Colder, snowier weather is on the way!

Karen of Leadville, Colorado emailed me to say that her little mountain town remains one of the cold spots in the nation. Her husband and dad "wore their Union Suits non-stop right through the summer months" there. Brrr! Her older son has been wearing his button-downs now too.

So Rich and Joe, Dave and Mario, Trevor and Peter, and all you Union Suit Fans, it's time to join me in getting 'em buttoned up. Winter is fast approaching. 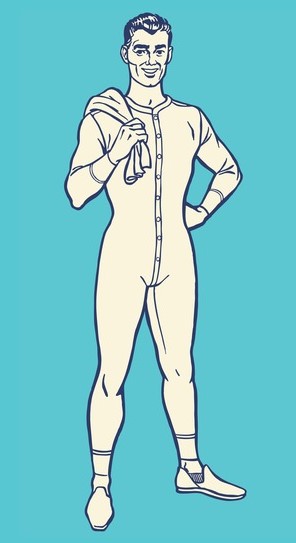 Posted by Union Suit Fan at 7:16 AM 3 comments: Links to this post


Once there was a forgetful boy, a very forgetful boy. It was not unusual for him to run out of his house early morning and race to the bus stop without his lunch bag. Occasionally, he would forget his belt and had to hold his pants up with one hand all day long. One time the boy ran out of the house and was half way down the sidewalk in the rain before he realized he had no shoes on. His socks were soaked before he could turn around and run back to his room to change them. In school he would have invariably forgotten a text book or two, maybe pencils and, of course, his homework now and then. Participating in boy scout camp outs he would frequently forget his sleeping bag, or his jacket, maybe a flashlight or change of underwear. At other times he would forget to take his bible to Sunday school.

His mom, dad, teachers, and scout master were regularly exasperated. Pleading, reminders, even threats seemed to have no positive affect on this boy and his memory. Yet this forgetful boy did very well in his school subjects. He excelled in mathematics and science and recalled history and geography details. But as he graduated to high school he remained oh so forgetful. The boy's mom commented as many moms do about their sons, "if his head were not screwed on tightly he would forget it as well."

As a high school sophomore the boy continued getting excellent grades despite being his forgetful self. During this year he tried out and was chosen for the school's basketball team. True to form, arriving for practice he would, on any given day, forget clean socks, on another day his shorts, on another day his jockstrap. He was simply inept at remembering. His coach grew more and more impatient.

One cold Monday morning, the boy forgot his entire uniform. He had taken it home to be washed but left it in the laundry room in his rush to catch the school bus. Upon arriving at the boys' locker room for practice, the coach had had enough. "You are not going to play in your street clothes and shoes," he told the boy. "Today, you'll practice in just your underwear and socks!”

No amount of pleading or promising to do better could change the coach's mind. "Strip and hit the court," he commanded. And so, the boy did - reluctantly.

It was mid-January so like other men and boys, his winter underwear consisted of a long-handled union suit. Hanging up his clothes and storing his shoes, he proceeded to the gym wearing only his long woolen underwear and socks.

The other boys laughed heartily at seeing their distressed team mate in his union suit. They chided him with diversionary comments such as "You forgot to button your flap" and "Look! His face is as red as his underwear!" Another team mate chortled, “Wait until the girls see you at our next game in just your union suit!”

Teenage boys, then as now, have no mercy. Good nature teasing each other is a favorite past time. Blowing his whistle, the coach finally stopped the chatter bringing some semblance of order to practice. The boys were soon concentrating upon basketball rather than the forgetful boy, ignoring the discomfort of one of their own.

Despite his embarrassment the boy did his best to persevere on the court, slipping and sliding around the gym in his socks, sweating in his woolen underwear. Yet he managed to hit some layups and a couple of hook shots. After a while he thought no more of having to run around in his underwear.

The hour passed and the boy returned to the locker room in his soggy union suit. The other boys continued razzing their unfortunate colleague. But the boy could give as good as he got. He had composed himself and offered some zingers of his own. Finally, after the other boys finished showering and dressing, they left for home tired but exhilarated.

The forgetful boy promised his coach he would do better to remember. It turned out the boy learned his lesson for he never forgot his uniform again.

I wish I could tell you that he became less forgetful from that day forward but some things never change. The boy became a man and now forgets where he places his car keys, his anniversary date, and the ages of his children.

Special Thanks to The Kilroys, America's Funniest Family!, a popular 1940's comic book family, who featured a boy by the name of Solid Jackson. Solid was a zany friend of the Kilroys' teenage son, Natch. Solid always seemed to find himself in the wackiest of predicaments such as his mom requiring him to wear his long red woolen underwear to his high school basketball games so he wouldn't catch cold. Solid Jackson was the perfect foil to align with my "forgetful boy" story.

The Kilroys stories and art: by Dan Gordon and others. His comic books featured various teen-ager hijinks. 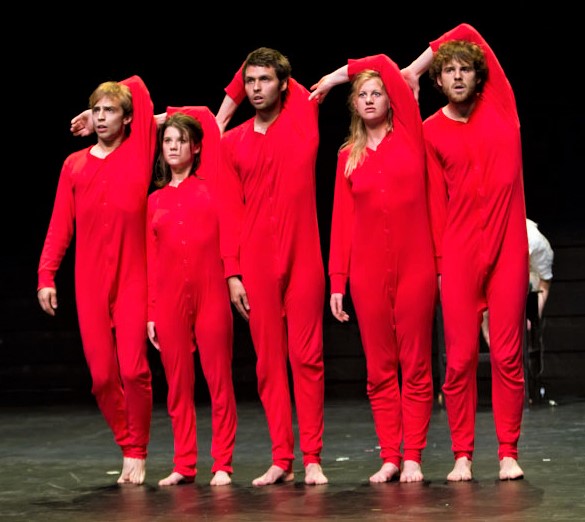 Union Suit Fan
Welcome to Union Suit Fan and my second blog, Union Suit Fans in the Limelight. ......Union Suit Fan is a blog promoting my favorite underwear: long-handled Union Suits! Postings include articles, stories, anecdotes, and photos of and for union suit fans everywhere. ..... Union Suit Fans in the Limelight began in May, 2018. It features artists, actors, singers, and dancers who perform in their union suits. It is surprising how many folks enjoying appearing on stage, in movies, or on television in their long, one-piece underwear. ..... Be sure to email me your favorite photo (tasteful), story, quote, or article! Your contributions make this blog much more fun, amusing, and interesting! Remember this is a Family Oriented Blog! .... As of June 25, 2017, this blog exceeded 10,000 views and as of December 9, 2019, over 85,000 views from 31 different countries; about 89 views per day... Welcome to all our newest viewers! Let me know what you think. And thanks to Union Suit Fans world wide! I appreciate your interest in Union Suits, our favorite long underwear! Remember, keep 'em buttoned! Contact me at cayersnd@gmail.com