This from Emma of Salem, Oregon:

"Chris, did you know that Barbie's boy friend, Ken, wears long underwear under his fashionable clothes? He's just an old-fashioned, cold natured boy like you. And he too prefers red union suits:"

No, Emma, I didn't know Ken wore long johns. Since I have only boys and no girls, I know little about dolls. I'd never given any thought as to Ken's underwear. And I sure didn't know he wore Union Suits. Thanks for enlightening me!

With the warm (and for many of you hot) days of summer upon us, a reminder of the cold days we just left behind.

After a full day of snowboarding in the great Rocky Mountains, Charlie lounged around the ski lodge one evening in his Union Suit, rather bored. So, after a hearty supper, this teenager decided to go "underwearing."

Underwearing is the act of running around outside in public in one's Underwear: boxers, jockey shorts, long johns, etc. I was unaware of this "sport" of sorts until recently. My young acquaintances must wonder what rock I climbed out from under.

Now I had heard that in the 1970's mostly college boys went streaking sans clothes, even ditching their Underwear! They would typically pull on their socks and shoes and place a stocking cap over their faces... preferably one that had holes for the eyes and nose. Then these adventurous boys would run buck naked through campus with abandon, many times chased by the campus cops! If you remember streaking then you probably haven't heard about underwearing!

Besides streaking I have also heard of National Underwear Day which is observed annually on August 5th. This is when mostly New Yorkers and San Franciscans run around the streets and ride subways or trolleys without their pants. 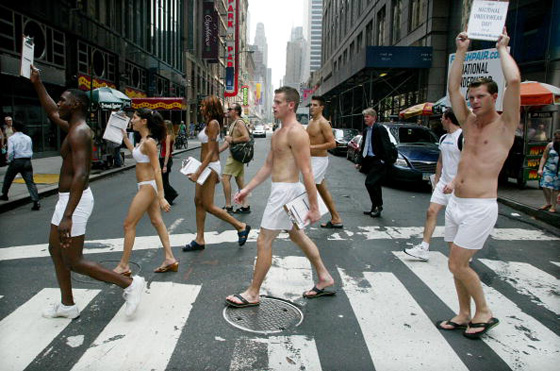 But "Underwearing?" That's a new one on me. I suppose many of the guys in this blog shown outdoors in their Union Suits would be considered having gone Underwearing.