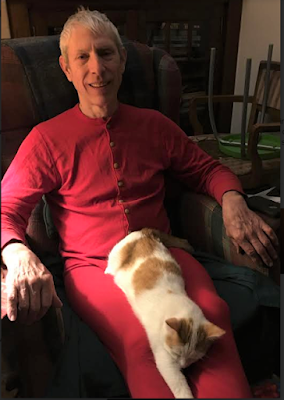 Here’s my story, Chris. I grew up in the mountains of rural Pennsylvania. Actually my ancestors were the original Europeans to settle that area. While I’m sure it wasn’t as cold as northern Idaho, our winters were quite harsh. As a boy I lived one cow pasture away from my grandparents on my father’s side. My grandpa wore union suits all year long. Each wash day there were at least two of them hanging on the clothesline. Even at a young age I thought they looked really cool and I wanted to wear long underwear like his. I never knew my father to wear thermal underwear of any kind which I thought was odd because he didn’t like being cold. Instead, he would wear two pairs of carpenter jeans. I never thought wearing two pairs of pants were at all comfortable. 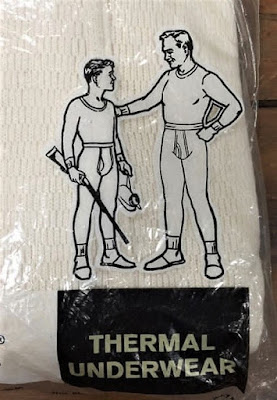 In 1958 when I started to grade school a lot of Pennsylvania men wore union suits back then as you can imagine. I don’t remember when I first began wearing two piece thermal underwear but I’m sure I was quite young. Our winters were indeed cold. We kids had to walk about a quarter mile to catch the school bus. However, unlike some poor unfortunates, we didn’t have to walk uphill both ways. The walk back home was downhill. Virtually all of us boys wore long underwear in the winter. Some of my schoolmates wore union suits. Since I had little say about the clothes I wore, there were no union suits in my underwear drawer. My mom bought all of our underwear.


Let me say here that I was a tall, gangly kid. At age 13, I stood 5’ 11 3/4” tall and weighed 142 lbs! The only clothes that fit me correctly were shoes, socks and tightey whiteys which I didn’t like then and still don’t to this day. But like I said I had little say about my clothes. However, I did manage to talk my mother into ordering me a union suit from the Sears catalog when I was in seventh grade. I was so excited when it came that I wore it to school the next day. Alas, like most other clothes, it didn’t fit me very well at all. It was woefully too short in the torso. I couldn’t wait to get home to take it off. Imagine my disappointment getting something I had wanted for as long as I could remember and then having it be so uncomfortable. Anybody who has put on a union suit that was too small for him knows what I’m talking about. Since I had asked for it I had to pretend to be wearing it but in fact I got almost no use from that first union suit. I went back to the two piece thermals.

My high school years were from 1966 to 1970. Nobody wore thermals at least not on the days we had phys ed. No, we were much too cool to wear anything as "old mannish" as long underwear!! I mean this was the swinging sixties after all. In retrospect, I think we were trying desperately not to look like the country bumpkins we actually were. 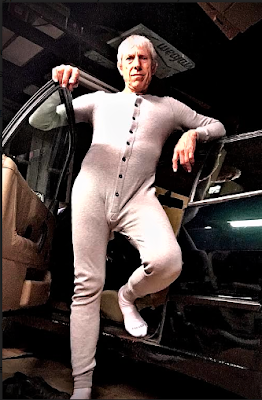 For a short time I worked in the deep coal mines of Pennsylvania. Everyone wore thermal underwear. You had to in the 1970’s as it was too cold to work in the mines without them. A few guys wore union suits including my buddy, Francis, who was about my size. Before I could find out where he bought ones that actually fit, he quit the mines and I never saw him again.

After working in the mines I moved to Ohio. I worked for many years in the automotive business mostly in “parts and service” but also in auto salvage yards. This work was cold in the winter months with cars coming in and out of the garages. Massive amounts of cold air blew in with each garage door opening. I became increasingly frustrated with the two piece thermals. The shirts had a habit of pulling up and out of my drawers leaving me with a cold lower back. In 1978 or so, while perusing a local discount / closeout store, I discovered two union suits that appeared to be about my size. I decided to try them on. And miracle of miracles, when I pulled them on they fit very well. They were so comfortable I thought I had died and gone to underwear heaven. I bought a red one with white buttons and a navy one with red buttons. 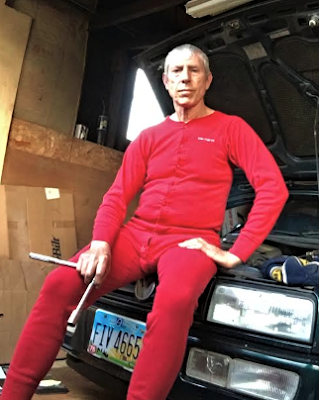 I immediately became a Union Suit Fan. I wore them day and night, all winter long. They were labeled “Sears Winter Skins.” I don’t know who really made them because Sears didn’t. They just put their name on them. If anyone reading "My Story" knows who made them I would greatly appreciate hearing from you. I would like very much like to buy a few more if they are still being made. They were a lot like Duofold Union Suits.

In the early 1990’s I found four athletic union suits (one button shoulder strap) on a close-out table at Sears. The fell just above my knee in length. I bought all of them, imagine that. I would purchase and wear them again if I could locate them. 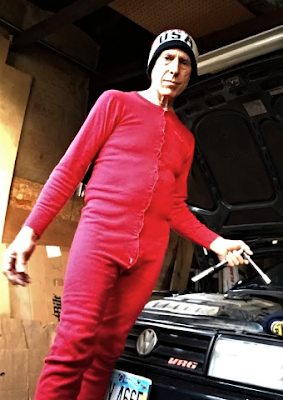 Over the years, I have taken a lot of mostly good natured teasing for wearing union suits. But I have also had many guys ask me “where do you get those one piece long underwear?” I am only too willing to point them in the right direction. I know some of you guys say you wear your union suits from … to .... with the months of the year inserted. I wear mine as soon as it gets cold to as long as it is cold. Where I live it is only about 50 miles from Lake Erie so our weather can be quite unpredictable. It can go from balmy to frigid in a day's time or less and vice versus. So I just wear mine when it’s cold regardless of what the calendar says. 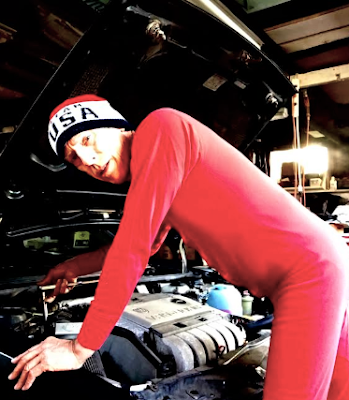 When I was that gangly kid I was very self conscious about my appearance and cared what people thought. Now I am way more comfortable in my own skin and also my “winter skin.” I don’t tuck my underwear into my socks and if they peek out under my pants or shirt sleeves, oh well. I just consider me wearing union suits as being an ambassador of comfort, and I am proud to be one.

There you have it, Chris. I wanted to be a writer when I was in school but my guidance counselor said “you might as well forget that.” Since I never was encouraged much when I was a kid I did as she said. Thank you for letting me share my story. 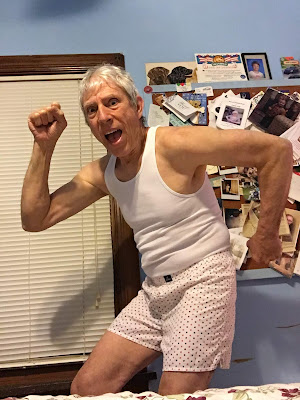 When Buckeye Mike of Canton, Ohio is not wearing his Union Suit, he races around in his Boxer Shorts. Thanks,  Buckeye, for sharing your story... Chris

Morning Chris, I remember this kid from one of your earlier posts. He wears red union suits like Buckeye Mike when he's in his garage working on his car. As soon as he kicks his pants off he'll be ready to get to work. LOL... Ben 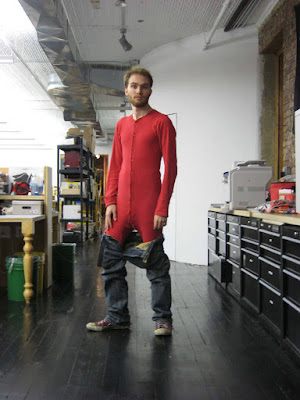 Right you are, Ben... Chris 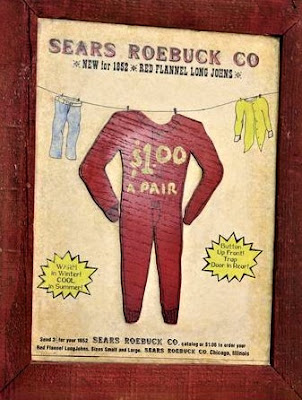 The following has nothing to do with Union Suits but the Levi Strauss magazine ad shown below got me remembering good ole Levi's. Back in the day, I soaked my blue, 501 button-fly Levi's overnight to get just the right softness, fading, and feel. But I didn't wait a year before I washed them as the ad suggested. My mom would have had a fit! ...Chris

Today is an anniversary for me. It was on this day, May 4th in 2016, that I began a blog on of all things Long Underwear. A specific kind of long underwear: Union Suits. The kind worn by men and boys (and some women) for generations. Four years ago I named this new blog, Union Suit Fan, for that is what I've been since I was a boy. Two years later I began a second blog, Union Suit Fans in the Limelight to recognize those who enjoy performing in their full body long underwear. There are enough Union Suit wearing guys around these days for two sites.

Now, admittedly, that was a pretty silly thing on which to base a social media subject. Union Suits! I wasn't sure such a topic would be of interest or enjoyable for anyone besides me. But, as things turned out, others thought the subject of Union Suits with articles and photos was fun too.

Men and women from all over the country and many parts of the world have checked in here. I've heard from so very many of you in emails and through notes you have left on this sight. I've heard from Union Suit Fans from most every state in the U.S. I have met new friends through their emails from Canada, the U.K., Poland, France, and Australia. Readers from nearly thirty countries have viewed my blogs. I've learned from you Union Suits have universal appeal.

Men who have never worn one-piece underwear have read about them and seen photos of other men and boys wearing and enjoying them. They have bought one or two and, with only one exception, have adopted them as their new winter underwear. Together, we have poked a little fun at each other and viewed famous people in their Union Suits.

In this trying time of Covid-19 with the illness and deaths spreading all over the world, I pause this anniversary day to pray for the lost souls and the families of deceased love ones. It is my sincere hope today, my friends, that you are well and safe.

I want to thank the many, many of you who have contributed over this time with your pictures, comments, and above all your guest articles. It has been my pleasure to get to know you through our "intimate" apparel.

Tomorrow, I will search for new ways to bring you a little cheer, a little warmth, and a little fun. Humor in this time is a tonic. Union Suits are to be worn, shown, laughed at, remembered, and enjoyed. In the meantime dear friends stay safe and warm, wear those masks, follow directives, stay alive so we can remain friends through this blog for a few more years to come. 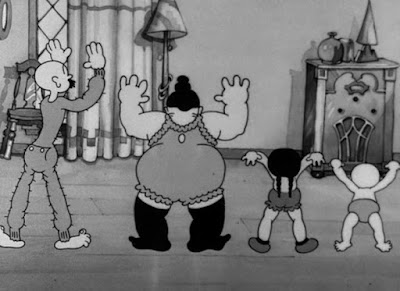 Stuck at Home These Days with the Family?  Well then, Exercise! 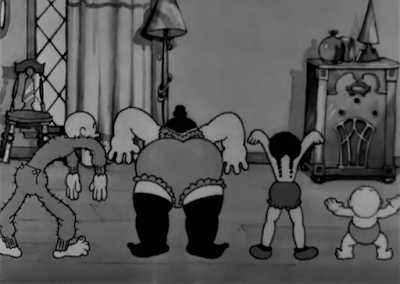 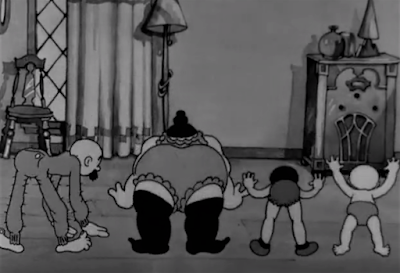 Everyone gets into the swing as they listen to the title song on the radio.

Here's another clip from the same feature: 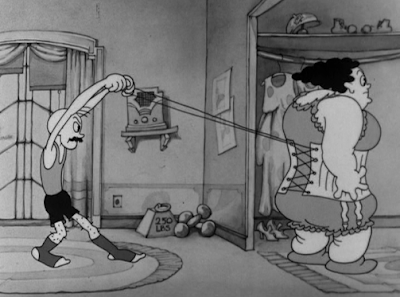