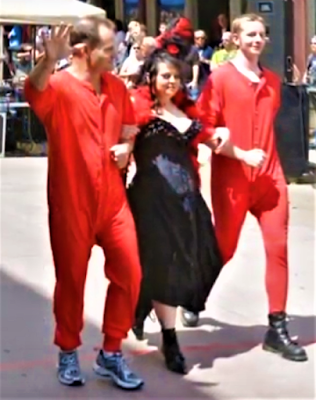 Gold miners in their Long Red Underwear escort Dance Hall Ladies in a recent Madam Lou Bunch Day Parade. The festivities are held each summer in honor of Central City, Colorado's last madam. Events include a Madams and Miners Ball, Tours of Rigs and Mines, Beer Garden, Food and Entertainment, and a popular Brass Bed Race!

Like many Colorado towns in the 1800's, Central City was settled in an 1859 gold rush. The town soon became known as the "Richest Square Mile on Earth." Millionaires were made over night!

On the third Saturday in June each year, most "miners" clad only in their red Union Suits escort "ladies of the evening" down main street in a popular town parade. One young lady is crowned "Lou Bunch Madam" of the year. 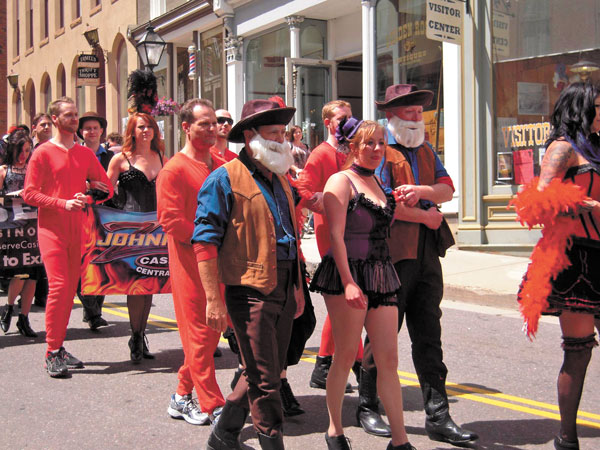 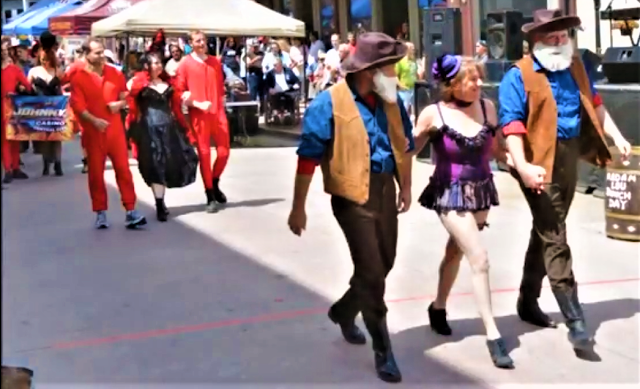 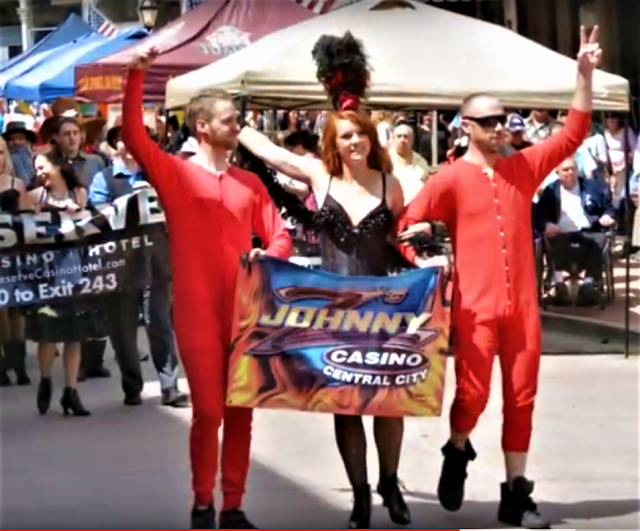 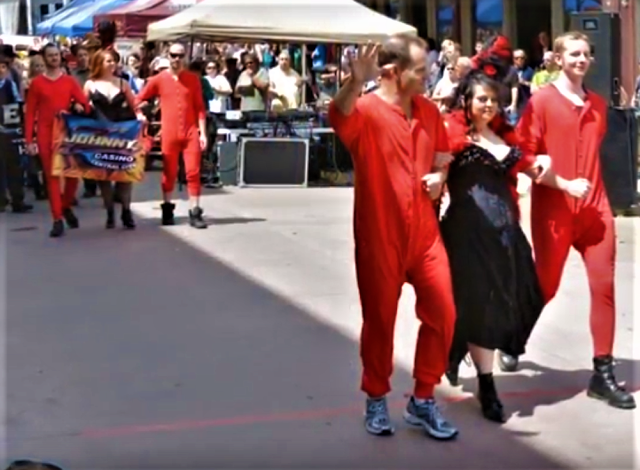 After the parade it is time for the the "Brass Bed Race."  The miners wearing Long Underwear jump on beds with their girls. One of the miners (the driver) quickly slips on a striped night shirt over his red Union Suit and pushes beds up and down Main Street for all he is worth. 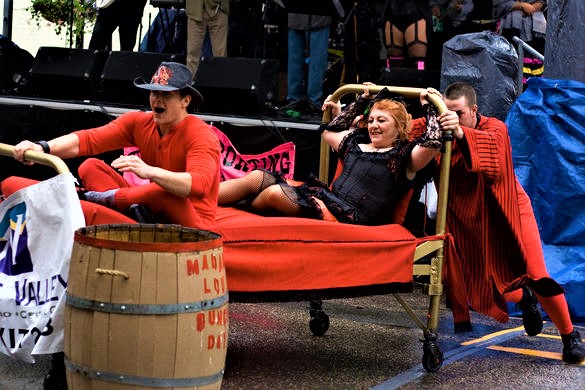 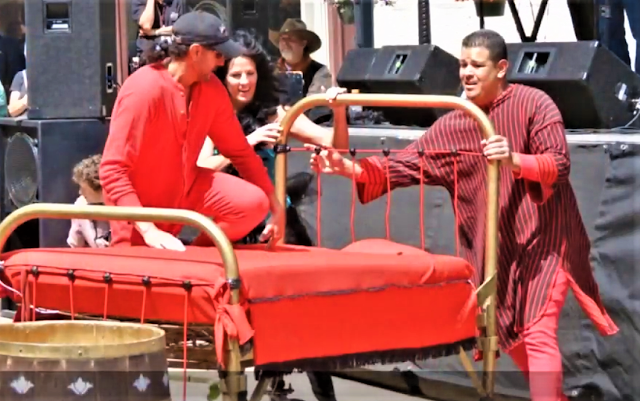 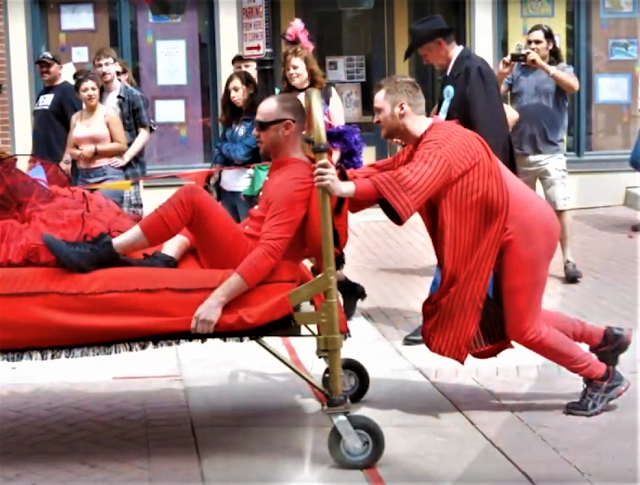 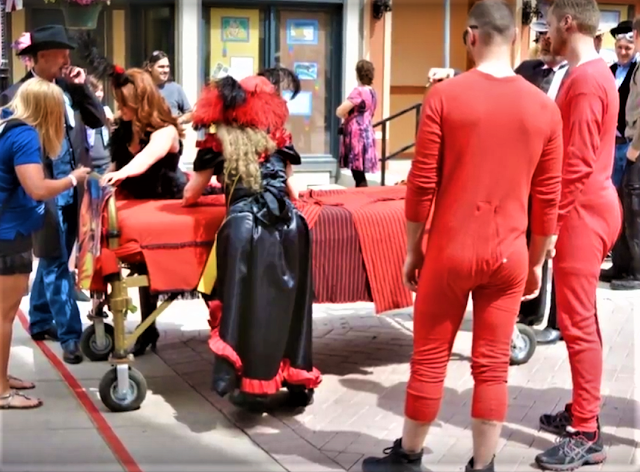 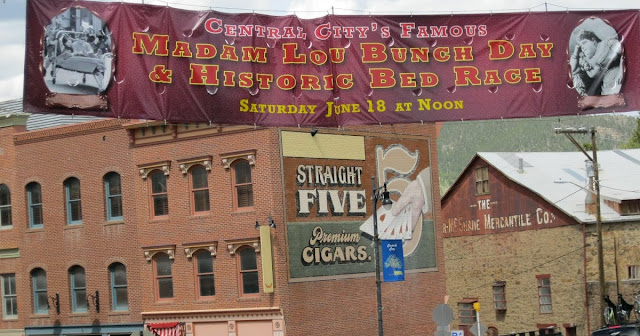 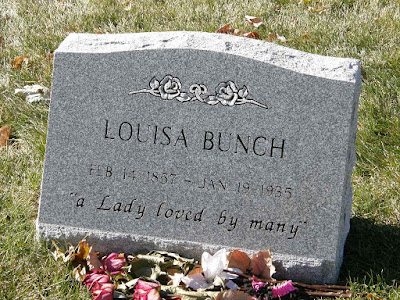 It is my unqualified opinion that modern day Colorado has more Union Suit wearers than any other state. At least that is my impression because of the number of guys who appear in public in their Union Suits! Plus it is down right cold in the Centennial State a great deal of the year. Yep, I think Colorado must be Number 1 with so many of the men there wearing one-piece long Underwear. And boys, that includes Montana, Minnesota, Michigan, Vermont, Maine, and even Tennessee.

It's possible that I am wrong but in addition to the Long John wearing miners above, Manitou Springs, CO also has Union Suit clad firemen who participate in an annual coffin race each October. See my blog posting of December 5, 2016: 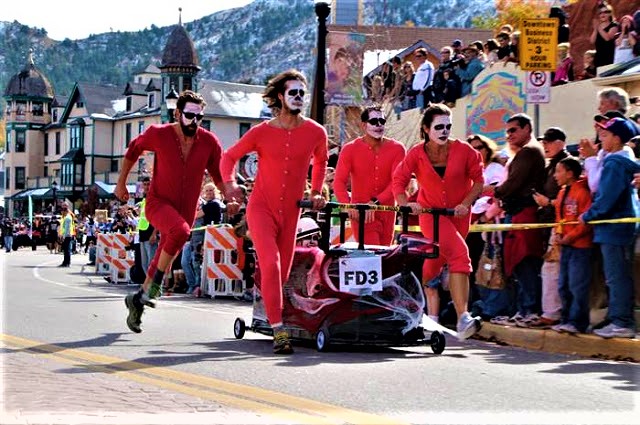 And, guys like Mike of Lakewood, CO hike around the state in just their Union Suits! See my posting of Mike's Winter Underwear Hike, November 4, 2016: 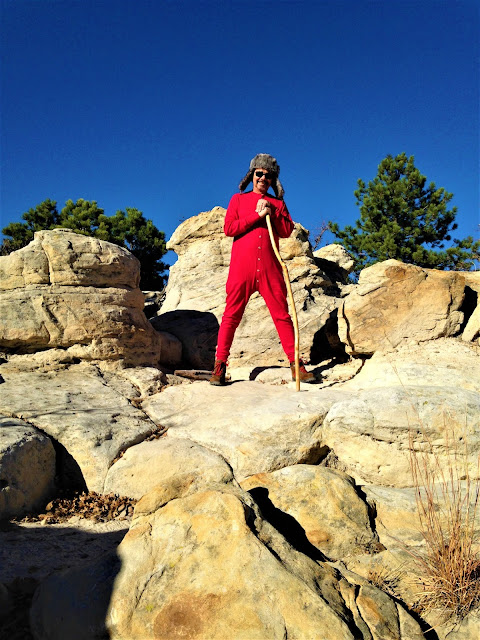 Apparently, in Colorado, generations of men and boys wear Union Suits. Take Karen of Leadville, CO. She has reported in this blog that not only her husband but her daddy and older son all wear Union Suits! I bet her granddaddy and great granddaddy did too!

Further Proof: As a boy my family and I took a trip to Colorado visiting Pikes Peak, Seven Falls, the Royal Gorge, and the fun western town, "Buckskin Joe's," located just outside of Canon City Colorado. I have never forgotten the main street gun fight with a stand off between the sheriff and a sinister bank robber. No blood was shed when the sheriff out drew the bad guy. Rather, his bullet hit the belt buckle of the robber causing his britches to plummet to the ground revealing his Long Red Underwear. Dropping his gun and abandoning a bag of money as well as his britches in the middle of main street, the bad guy was run out of town in his Union Suit. I thought it hilarious! 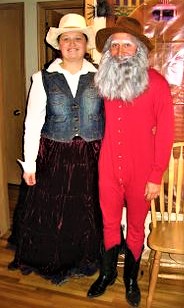 Franklin of Carson City, NV submitted the above photograph of "another grizzled gold miner with his lady friend sporting boots and red Long Johns."

Thanks, Franklin! I don't know if this is you in disguise but apparently Nevada gentlemen wear their Union Suits to special events as well. Regards...Chris