The underwear of U.S. presidents has been documented from the time of Abraham Lincoln to Bill Clinton. Honest Abe's long white drawers reportedly peaked out from his trousers' cuffs when riding a horse. His critics thought him a country bumpkin with lanky legs showing his underwear which was longer than his trousers. And Bill admitted to wearing "mostly briefs" when asked by a young go-ed whether he wore boxers or briefs.


Union suits were most likely worn by presidents from U.S. Grant to George H. W. Bush. The ingenious underwear was patented in 1868 and first manufactured in Utica, New York. Union suits worn by two presidents have been extensively covered (pun intended) in news' reports and books: Presidents John F. Kennedy and Calvin Coolidge. 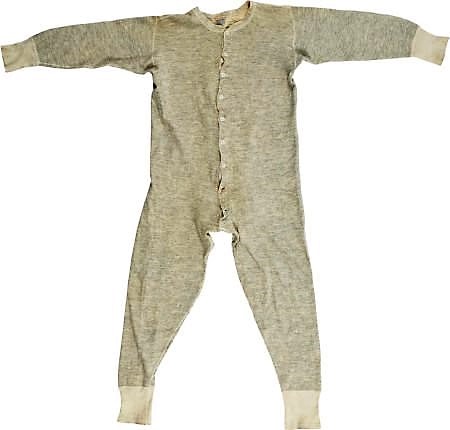 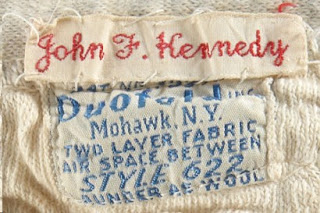 His name was sewn into his long johns just above the inside Duofold label thereby indicating this president's underwear preference was union suits.

The following is an article written about JFK's union suits in June 1998:

Camelot Exposed
An intimate encounter with JFK's base layer

By Tizia Garden
"For all his virile athleticism, let it be said that John F. Kennedy was no icon of hard-core outdoor adventure. The man never free-climbed a 5.10 pitch or threaded the tube of a monster wave. He couldn't pull an indy grab; he couldn't ride fakie. And he probably didn't know the difference between a Jumar and a set of jumper cables.
These peccadilloes may explain why the allure of his cult has always eluded us. Nonetheless, when we heard that a few hundred items of JFK memorabilia were on the block at a Manhattan auction house, we immediately dashed over. The wares that caught our eye? Two sets of Duofold Long Johns, size 40, that once cradled the nether purlieu of Camelot.


The whiff of adventure clung beguilingly to these frayed state-of-the-union suits, fashioned by a company whose label has brushed such legendary backsides as those of Sir Edmund Hillary and the 1998 U.S. Winter Olympic Team. Sure, old underwear may seem somewhat (OK, totally) devoid of appeal, but in us they aroused an admittedly odd curiosity. We pictured them warming the derriere-in-chief during yachting forays off Hyannis Port, on the slopes of Mount Mansfield, even in those celebrated Kennedy touch-football battles."

Calvin Coolidge always wore union suits from the time he was a little boy throughout his presidency and beyond.

The very first time Grace Goodhue laid eyes on Calvin Coolidge she said she was watering flowers at school and happened to look over to see a young man standing in front of his apartment open window shaving. He was only wearing a union suit (long underwear) and a derby hat. She had a great laugh out of it. Coolidge looked out at her, smiled, and continued shaving! He later confessed that whenever he shaved a lock of hair got in the way. So he used the hat to hold it down while he washed his face and lathered up. Grace and Calvin began dating and later married. How many presidents (or any guys for that matter) meet their future wives while clad only in their long-handled underwear? 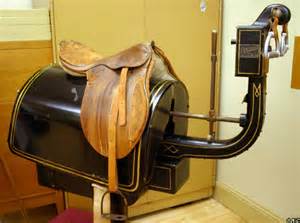 Given to him originally as gag gift, Coolidge kept his mechanical horse upstairs in the White House where he and Mrs. Coolidge lived. He had first climbed on as the result of a dare. He actually really liked the "horse" and rode it often. To the amusement of Mrs. Coolidge and many White House visitors, he rode the mechanical horse throughout his presidency, always while wearing a cowboy hat and, most often, while wearing just his union suit! Secret Service agent reports indicated that he often wandered the White House halls late at night in just his long one-piece underwear.

WASHINGTON (UPI) - Ordinarily, I suppose, a man’s underwear would be to racy a topic for the public print, but for the sake of nostalgia perhaps an exception can be made.

The William Carter Co. of Needham Heights, Mass., celebrating its 100th anniversary, marked the end of an era by announcing that it has quit making union suits.

"Early in the century,” it said, "Carter’s led the country in the production of union suits. At that time they were called ’combination underwear’ and boasted such illustrious wearers as Calvin Coolidge, president of the United States. While Carter’s has been supplying ’old friends’ with union suits in recent years despite sharply decreased demand, it was felt that the 100th birthday was a good termination point.”

Yields to "Fashion" the company explained that "demand for fashion garments, such as T-shirts and printed boxer shorts, has edged out union suits.” As the Latins used to say, “sic transit gloria undie.” Possibly some members of the audience either are so young or, in the case of maiden aunts, have led so sheltered a life that they don’t know the difference between the old era and the new. For their edification, I will quote Webster's definition of a union suit: "An undergarment worn by men and boys with shirt and (pardon the expression) drawers in one piece.”

It may be that some other companies are still producing union suits for old times’ sake, but for all practical purposes integrated underwear is dead, may it rest in peace.

Resting in peace was pretty difficult when you were wearing a long-handled union suit. I know because when I was a boy back during the Coolidge administration I used to sleep in them. They had a way of bunching up on you during the night, so that you might wind up with a foot caught in the rear vent. Since Coolidge slept in his union suit, it might explain why he was known as “Silent Cal,” After wrestling with them all night, he would have been too exhausted for conversation. But old Cal liked them for the simple reason that they gave the wearer a sense of security.

A man in his underwear is a pretty ridiculous figure at best. In exchanging the simple dignity of the union suit for the loud colored boxer shorts, he has, I fear, made himself even more so.

Posted by Union Suit Fan at 9:06 AM No comments:

Me and My Union Suit

In regard to union suits, I am asked which ones are best. I don't consider myself an expert but I have worn union suits since my grandmother purchased one for me at Sears when I was a fourteen year old boy. That suit was warm and comfortable and was just like the long-handled button-up underwear grandpa always wore! I have been wearing only one-piece long underwear since then. Two piece underwear is inferior as far as I am concerned. I have tried a variety of union suits over the years and must say my favorite maker is Carhartt. Although, like President Kennedy, I like Champion Duofold union suits too. They are the ones with the cotton / wool blend...Warm!

That being said, Carhartt union suits are superior to all others that I have purchased and worn. They have plenty of buttons up the front of the suit and the last one my wife gave to me this past Christmas has a two button vertical flap. The wrist and ankle cuffs have the just the right snugness and don't stretch out. And, the brand name, "Carhartt," is proudly shown across the upper chest.

If you've never purchased or worn Carhartt  or Champion Duofold Union Suits, you are really missing out! 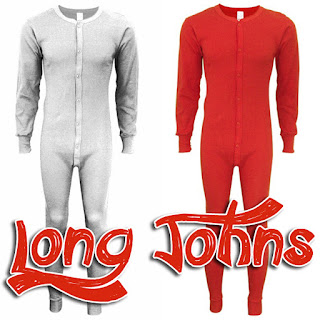 Email ThisBlogThis!Share to TwitterShare to FacebookShare to Pinterest
One of my favorite Union Suit articles was written by Bill Reed, dated December 6, 2005, and was entitled: State of the Union Suit!   Hopefully, he won't mind a partial reprint.

"Maybe it's the sheath of cotton running seamlessly over the body like a second skin. Maybe it's nostalgia. Maybe it's the giggle-inducing flap that buttons up in back. Or maybe, just maybe, it's an elaborate excuse for men to pull off those tighty-whities and slip into bright-red underwear.

Whatever it is, the venerable union suit won't go away....The one-piece wonder of long underwear has been around for nearly 150 years, and sparks vivid memories for its devotees."

To read his entire fun article go to:


"Whenever you’re sitting across from some important person, always picture him sitting there in a suit of long red underwear. That's the way I always operated in business."

Email ThisBlogThis!Share to TwitterShare to FacebookShare to Pinterest
Why are these Boys outside in just their Long Red Underwear? 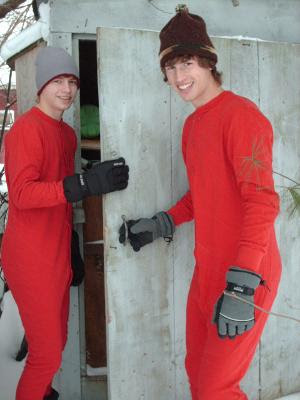 
He's Wearing Long Underwear and Socks from J.J. Crew
Posted by Union Suit Fan at 10:10 AM No comments: