Chris, The Springfield Art Museum located in Springfield, Missouri presently has an art exhibit which I believe would be of interest to the followers of your Union Suit blog. The museum has recently obtained two more lithographs by artist, Grant Wood (1891-1942). It now owns all 19 of his works of this art form. Wood is most famous for his iconic painting, American Gothic. As background, Wood was born and reared in the state of Iowa and became world renowned in the mid-1930's for his depiction primarily of mid-western farming life and American values. His paintings and lithographs were termed “regionalism” and became very popular during the Great Depression.

A lithograph is a printing process that uses a flat stone or a metal plate on which image areas are depicted using an oily or greasy substance allowing ink to adhere. The quality is very good and has the advantage of selling more cheaply than original oils. Wood and other lithograph artists sold their works for about $5.00 each in the 1930's as members of the Associated American Artists. Regular folks could purchase these works at a reasonable price and own art by a famous artist of their time. The current Springfield Museum exhibit features themes of this period and examines the role and popularity of American printmaking. 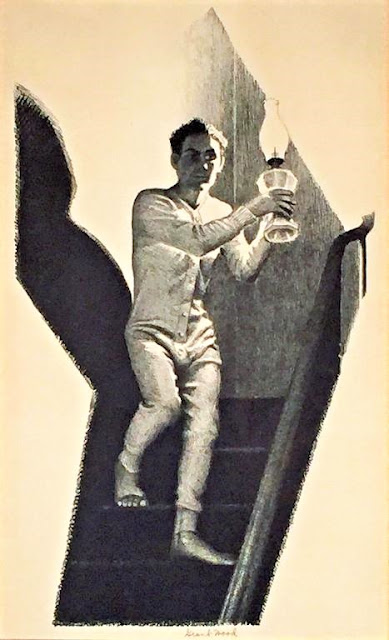 The particular lithograph that may be of interest to your readers is entitled “Midnight Alarm.” This 1939 Lithograph On Paper features a young man, possibly a farmer, carefully descending a flight of stairs in the middle of the night barefoot and wearing only his union suit. His face is a “mask of concern” as his tense feet carefully grope their way downward. The young man holds a hastily lit lantern as he attempts to discern the unfamiliar noise that woke him from a deep sleep. The lamp's bright illumination contrasts masterfully a sense of the young man's alertness and dramatic fear of the unknown. Wood's attention to detail is remarkable right down to the young man's eyebrows and the cuffs and buttons on his union suit.

The man’s facial features point to the use of a model, quite possibly twenty year old John Arthur Mooney. Mooney was a photographer living in Charles City, Iowa at the time. He and Wood were contemporaries who were acquainted with each other. A photograph of young Mooney shows that he had the same eyes, ears, high forehead, cheek bones, and curly hair as the man in the lithograph. These physical traits are so similar as to be more than conjecture. Mooney was an avid art collector as well as a popular photographer. He eventually owned two of Wood’s lithographs, “Honorary Degree” and “Tree Planting Group,” inscribed “To Arthur Mooney” and signed “Grant Wood.” Most certainly at the time both the artist and model wore union suits as a matter of course. 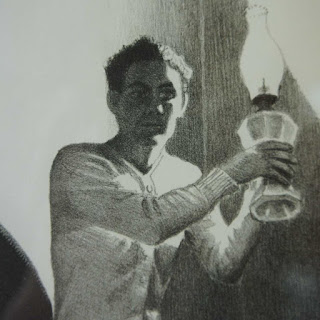 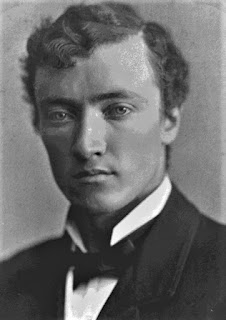 The resemblance is so similar that the model must have been John Mooney.

Several art critics have examined “Midnight Alarm” as one would expect. One overly simplistic review sees “humor” in his 1939 lithograph. “Wood found amusement with the idea of long underwear. The face of the man descending the stairs seems alert and ready to act as his ominous shadow follows him down the staircase. However, there is a sense of vulnerability about the man as Wood has chosen to comically depict him in his long underwear.”

Vulnerability, yes. Comically, perhaps not so much. The critic's opinion is unmerited if one remembers the time period in which this lithograph was developed. Men typically slept in their long underwear or night shirts. Although union suits today are considered comical to many, in mid-twentieth century America one-piece long underwear was worn by most men and boys especially in rural areas. Farm houses had no central heat, many had no electricity or indoor plumbing. This was the era on which Wood's work was demonstrative. Union suits were an essential part of Americans' wardrobe and not considered humorous.

Few works of art depict long underwear as intimately as Wood's lithograph, "Midnight Alarm." It is noteworthy that he planned another work featuring a union suit. This according to his sister, Nan Wood Graham. The 1939 lithograph has a relationship to a painting Wood considered and had even titled, “The Bath -1880.” This oil was to feature a man clad only in long, red flannel underwear preparing to take a bath. Miss Graham was quoted as saying many years later that “Wood made a considerable effort to locate an authentic pair of red long underwear for the work.” It is not known whether he actually made purchase of that red flannel underwear.

Wood advertised for a subject in Iowa and other mid-west newspapers during this time. He identified a young Cedar Rapids model to pose in the red union suit. However, his name is lost to history. John Mooney was possibly another model considered for “The Bath – 1880.”

Unfortunately, according to his sister, Wood abandoned the proposed painting. He became angered by local press coverage that suggested the planned work was “a publicity stunt.” Wood may have been even more dismayed of possible newspaper reports, accurately or not, revealing that he had an unusual interest in men’s underwear, an interest unremarkable in today's world.   ... Spencer Hastings.

Spencer, I thank you for this insight into Grant Wood's lithograph, “Midnight Alarm,” and for bringing it to my attention. This lithograph is sure to be of interest to Union Suit Fans. I appreciate you taking the time to share.

Coincidentally, the same week I heard from you, I received an email featuring additional "Union Suit" art by none other than Grant Wood. Although not as prominent as the farmer descending the stairs in his Long Underwear, it never-the-less depicts a Union Suit. In this instance, President Herbert Hoover's Union Suit hangs from a boyhood farm house clothesline. Not surprising, Hoover was from Iowa as was Wood. No doubt, both men wore one-piece, button-down Long Johns. Perhaps Wood did have an interest in men's underwear, why not? 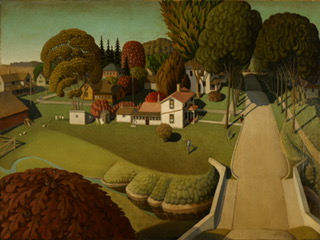 Joe of New York City emailed, “On display today at the Whitney in downtown Manhattan is a Grant Wood exhibit: Best known for AMERICAN GOTHIC, he also painted the above titled “THE BIRTHPLACE OF HERBERT HOOVER, WEST BRANCH, IOWA.

And why am I sending this? Well, cropped a bit, look at what is on the President’s clothesline!  Keep ‘em buttoned, Joe.” 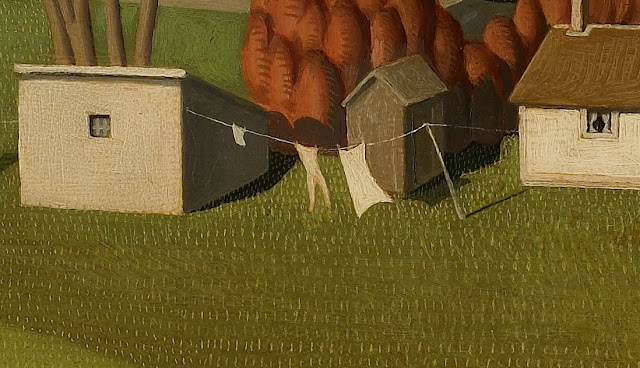 Yep, sure enough, there is Hoover's Union Suit. Thanks, Joe! ...Chris

Hey, Fellas:  as you can see by this and other guest contributor postings, I am always encouraging fans of union suits to email me stories, photographs, anecdotes, and life experiences in their one-piece Long Underwear. Let me hear from you today!  Email to: cayersnd@gmail.com