Since the time we men first began wearing Union Suits (in the 1870's) we have had to decide whether to tuck the bottom cuffs of our long underwear into our socks or leave them on the outside. 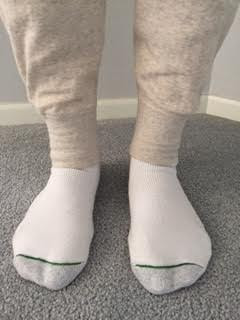 
By the way, these photos are of
me, not Bill, wearing white socks with the bottom portion of my "Oatmeal Heather" Union Suit by Champion Duofold showing. As you can see by my Featured Post: Me and My Union Suit, I typically wear my
long underwear outside of my socks!

Bill:  I’ve spent a large portion of my life wearing union suits. So, as to your question, Chris, to tuck long underwear into your socks or not to tuck? Hmmm. I've spent many sleepless nights worrying about that question!


I’ve been perplexed with the nagging question that probably bothers many union suit fans: Should the ankle cuffs of my long underwear be tucked into my socks, or should the cuffs be placed over the socks for the world to see. For example, when the bottom of your pants ride up whilst sitting, exposing your underwear?

As for me, a "country bumpkin" at heart, I usually don't tuck my union suit into my socks. I like to have them exposed so as to show off my long johns. I adhere to The few. The proud. The union suit wearers.

Sometimes though, I am a tucker. Some of my union suits reach only to the bottom of my calves, especially the older Hanes unions that are my summer garments. With those suits, I wear longer socks and tuck in the cuffs. The good thing about tucking is that the tension which the socks place on the union suit legs makes for a rather comfy feeling as I walk around. There is also a more noticeable frequent sense that I am wearing long underwear.

The most detailed description of how to answer this question actually comes from a buddy of mine (let’s call him John) who likes to talk about his college experiences.

John made sure that a supply of union suits was part of his college wardrobe. As it turned out he had a roommate from British Columbia, a Canuck, who also wore union suits – exclusively Stanfield’s. The roommate was a socks tucker big time. John did not believe in tucking the bottom cuffs of his long johns into his socks. Looking askance at John, the Canuck would tell him that it was positively improper for failing to tuck his underwear into his socks!

John eventually told his roommate that a Canadian didn’t have a monopoly on how guys should wear their socks and union suits!!  John told me how he and that darn Canuck, continuously laughed at each other wandering around the dormatory in their long underwear, wearing their socks the way in which each wanted.

As for me, I am often on the lookout for how people who wear long underwear handle the cuffs of their long handles. If you’re like me, it’s not everywhere you go that you spy those long johns cuffs. But it always wakes up a pleasure point somewhere in my brain when I see socks that are obviously containing some well tucked underwear cuffs or better yet, long john cuffs which are exposed and maybe deliberately riding over the wearer's socks.

So how about you, Chris?  Tucker or not?

Chris: I admit to doing both but must say I am a very limited tucker. I wear union suits to sleep in from Labor Day to Memorial Day and, many times, into the early month of June. If I don't tuck those cuffs into my socks when going to bed, my underwear rides up above my knees (I have skinny legs). I feel strangled. You no doubt have heard the old saying of being "all tangled up in your underwear".  I'm sure that comes from guys' union suits riding up on them.

All other times, I don't tuck my long johns into my socks and never have. How can I show off my unions in public if I don't let them be seen?!  Also, I quite often unbutton a couple of top buttons and roll up the sleeves of my outer shirt when wearing long underwear.  Crazy, I know, but great fun to let the world know I wear Union Suits! My wife told me layering with a bit of red showing is very fashionable on men these days! So why not?