At the end of the 19th century, Stanfield’s Company created a name for itself by selling full-body long, one-piece underwear to those heading northwest to strike it rich in the gold rush!  This 1900 ad by A. E. Hunt & Company featured Stanfield's Underwear, made by the famous Canadian manufacturing company. The cost was only $1.19 per suit, red or blue label, and was such a bargain that the clothing company limited sales to only "two suits" (combinations) per customer.

Sam of Northern Lower Michigan emailed me to correct the fact that Canadian one-piece underwear, including Stanfield's, are called "Combinations" not "Union Suits"! He tells me that "in Canada you don't ask for union suits you ask for combinations or combinaisons if you are French speaking."

Thanks, Sam for getting it right! Thanks to you I have today changed references to Union Suits in this posting to Combinations. I strive to be accurate for my Union Suit Fans (U.S.) and Combinations Fans (Canada). I should have known better as a number of years ago, just out of college, I visited the United Kingdom. My hosts in London, England noticed that I was wearing a union suit. They referred to my long underwear as "Combinations." It makes sense that Canada would follow suit (pun intended).

Stanfield's long underwear is still very popular today. A couple of my Union Suit Fan pals recently emailed me stating that they buy and wear Stanfield's.  Here's more from that outstanding company: 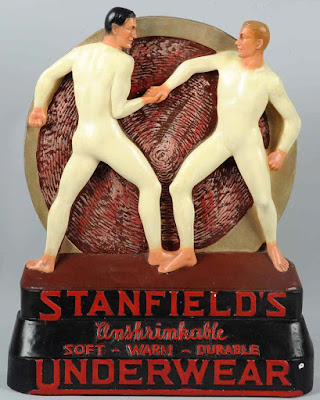 Stanfield's Combinations are not only Unshrinkable but

Stanfield's provides valuable information for their customers in purchasing Combinations and other types of Long Underwear. Package instructions below are typically shown in both English and French Languages.

English: It was below freezing temperatures, so he decided to wear long underwear. 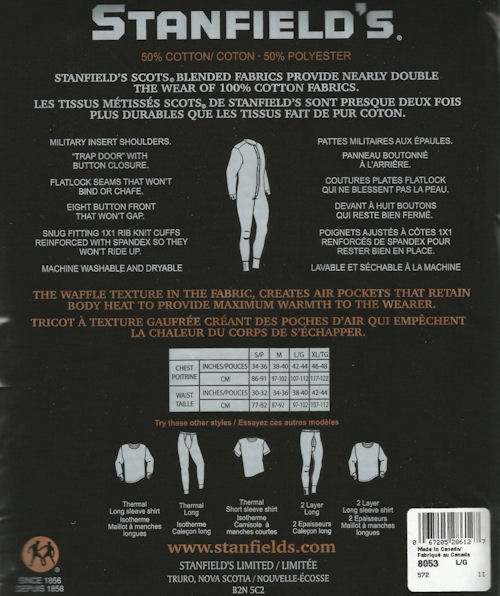