RC in His Red Union Suit


Having lost a wager to me a couple of years back, I required my pal RC to drive to our office and work all day wearing nothing but his underwear!


Here's how it happened:

Forever, I had been trying to get RC to bet with me on a subject that will go unreported to protect the innocent. He would adamantly refuse continually saying to me, "I only bet on a sure thing!" And that was that, for awhile. He must have finally tired of me nagging him and so gave in. By evidence of the above picture, you can see that I won that little wager!

Upon arriving at our office after our wager the next morning, RC asked me begrudgingly, "Ok, you won. I'm ready to pay up. What is it you want from me, a steak dinner, a case of beer, what?"

"Oh nothing like that," I gloated, "all you have to do is just come to work tomorrow as usual."

"Catch? Now why would you think there's a catch?"

"Well," I added, "actually there is one small thing you need to do..."

"...come to the office tomorrow... in your underwear."

"What?!! My Underwear? You're off your rocker! No way am I going to do that! I'll bring you a case of beer."

"Huh-uh," I retorted, "a bet is a bet and you lost, pal! You'll be working here in just your underwear, all day! Have fun!"

Well, I could hear RC mumble under his breath the rest of the day. He walked around with a long face like a dejected hound dog before going home.

Now, I didn't specify what kind of underwear RC was to wear for having lost our bet. He could have shown up in his boxer shorts for all I cared...just so he arrived ready to work in his underwear. I mean, gee whiz, he lost our wager for goodness sakes. The least he could do was to pay up, right?! Admittedly, I didn't know if he would actually show up the next day without his clothes or not. RC did have somewhat of a shy streak.

So, the next morning I arrived early to see how this would turn out. Good thing I got to the office sooner than later that day. Peering out my window, I saw RC drive up and park. He was an hour earlier than normal. I could see him sitting in his car, looking around. After a minute he climbed from his car and made a mad dash for the front door of our building. By gosh, he was clad only in his underwear... a bright red union suit!

Laughing, I greeted RC: "you're here, and in your underwear."

RC gave me a withering look, followed by a big, sheepish grin. "Yeah, a bet's a bet, big guy. So, here I am. It's the middle of November, so I wore my long johns. Hope that meets your requirement!"

It did. It sure did!

Just about everyone knew that RC wore long one-piece underwear from about Labor Day to Memorial Day. You could say he was "cold-natured." So no huge surprise he wasn't wearing his boxers. RC standing there in a bright red union suit was funnier anyway.

"Boy, did I drive carefully, watching my speed. I didn't know what I would say to a cop if I had been pulled over for speeding or had been in a car wreck in just my underwear."

Enough small talk; RC raced straight to his office, kicked off his boots, and sat down at his desk. He brought his lunch to eat at his desk so as to keep as low a profile as possible. A couple of times he had to sneak down the hallway to the men's room. For the most part though, he was careful to stay at his desk that day. No meetings, no appointments for him.

But, no low profile was in the cards that day as I had made sure everyone in the building knew RC was at the office in nothing but his union suit. Why, more people found an excuse to visit him that day than in any given month. His face turned red with the first early morning visitor and remained that way for the rest of the day.

Everyone had a great time even RC after he got use to the idea. He was a terrific sport about the whole thing especially when nearly everyone insisted on taking his picture. Something about seeing a guy in his bright red long underwear had everyone laughing and bantering with him for days afterward.

As for RC, he stayed an extra hour after work that day until it was dark. Still in his long underwear, he darted to his car and drove home without incident. I placed that photo of RC in his union suit on my facebook and it quickly found its way to the internet. I had an 8" x 10" print made of him in his underwear and tacked it to the company bulletin board where it remains. He's famous now!

As for me, well, RC got his revenge. Not long afterward, he approached me wanting to make another wager. I reminded him that he only bets on a sure thing.

What choice did I have? I would have looked like a real chump if I declined his offer. So, I took the wager and this time, I lost.

"I suppose now you will make me come to the office in just my underwear," I told RC.

"No, not at all. I wouldn't do that to you," sniffed my friend, "No, you just ride around town on your bike for one hour on a bright sunny day.... Oh, and by the way, wear your red union suit!"

Thanks, Tom. I appreciate your contributing this really funny story. A guy losing his britches and running (and subsequently, in your case, biking) around in his Union Suit is a great way to pay off a bet. I have already posted two previous "wager stories" to this blog wherein guys lost their bets and their pants! Reduced to their Union Suits,they were required to run around in public in long underwear: Ritchie Cunningham: Union Suit Fan (November 18, 2016 from "Happy Days") and Mike's Winter Underwear Hike (November 4, 2016).

By the way I always encourage other of my Union Suit Fans to contribute their own stories, articles, and photos. Send to cayersnd@gmail.com and thanks!

Like this one I recently received from Naomi of International Falls, Minnesota and added July 12, 2017:

Chris: your post regarding the gentleman who lost a wager and was made to work all day in just his union suit reminded me of a very funny book, Horrible Harry and the Triple Revenge by Suzy Kline. Ms. Kline has written a number of books about Harry, a mischievous boy who is always finding trouble or, perhaps, trouble is always finding him. My ten your old son loves Harry and particularly this story where Harry makes a wager with a classmate and ends up attending school in his long underwear. Have you noticed that little boys think underwear is about the funniest thing they can imagine? Books like Bear in Underwear, Captain Underpants, The Underwear Book, etc. are very popular with the kids.

At any rate Harry and his friends attend Southeast Elementary School where they have all sorts of adventures. One winter their teacher plans Pajama Day which all the kids are anxiously awaiting. They sit around the lunch room the day before discussing what they are going to wear for this special day. When asked what pj's he will wear, Harry admits that he doesn't wear pajamas to bed. He tells the boys and girls that instead, "I just go to sleep in my underwear."

Sid, a boy in Harry's class, scoffs and says that he has a "dare" for Harry. He snears, "Wear your underwear to school tomorrow for Pajama Day. It's what you wear to bed!"

Harry contemplates this for a moment and says that maybe he will do just that. But on the condition that if he does, Sid must leap around school all day like a praying mantis.

Sid made the deal saying to Harry, "You'll never wear your underwear to school!"

The next day Harry is late to school and the other kids, all dressed in their pj's, anxiously wait and wonder if Harry is really going to show up in his underwear. Harry finally walks into the school room and, like RC in your post, is wearing only his underwear ....long johns. Harry spends the day in his long winter underwear and Sid jumps around like a praying mantis.

Chris: Naomi, thanks for contributing this story. Big boys think underwear is pretty funny too! Just ask any Union Suit Fan. I had not heard of Horrible Harry but now that I have I should buy this book for my grandsons. Here's a couple of photos I found from the book you site including Harry at school in his Union Suit. 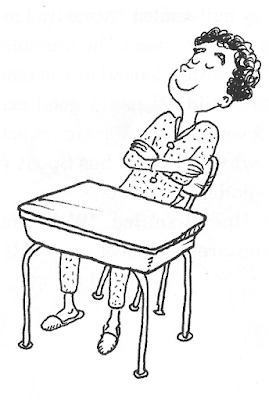 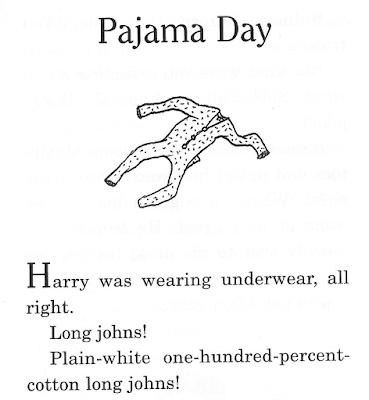 Thanks Naomi and a special thanks to author, Suzy Kline!

Chris, I ran across these photos on the internet. Is this Tom Moss riding his bike in his long, red underwear?

Ryan, I checked with Tom. This guy is not he. Tom says he is taller and a bit skinnier. When he rode his bike around town in his red Union Suit he was wearing tennis shoes. He stated that he always wears a helmet as is the rider below. Tom says he might leave his clothes at home but not his helmet! 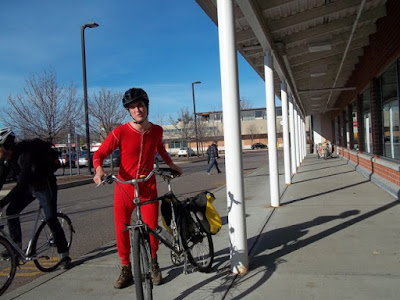 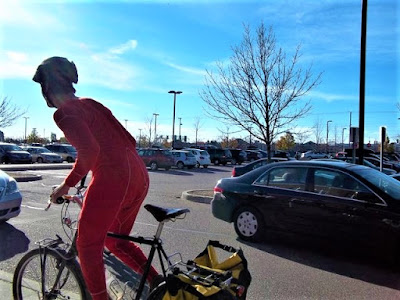