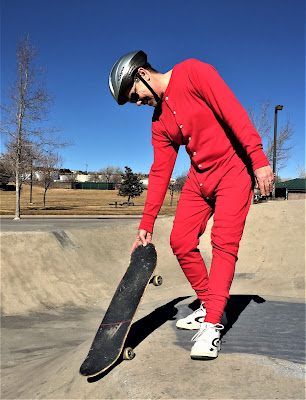 Union Suit Fans - Tom and RC Are At It Again.
Read On:

RC Loses Yet Another Wager! by Tom Moss, Guest Contributor

"I only bet on a sure thing," declares my pal, RC, whenever I mention a wager. And, he means it. A principle he has always lived by. But all bets have risk no matter how good of a "sure thing," even for him.

As I reported in a previous guest posting to this blog, RC lost a bet to me three or four years ago. We had not agreed on just how we should settle the wager beforehand. It was, you could say, an "open" bet. Therefore, upon winning, I told him he should plan to arrive at our office as usual but sans clothes, clad only in his underwear. Despite putting up a stiff argument and pouting for a day, RC had no choice. Being a union suit fan from boyhood, he chose his red long johns for that occasion. A good choice as it was chilly that November day. Besides, his appearing in public in a union suit is arguably more comical than in full-cut boxer shorts or tighty whities any day.

Since that first wager, the loser of subsequent bets has been required to appear in public wearing only his long, one-piece underwear, always red, to settle our bets. RC and I are a bit unhinged and a bunch juvenile (just ask our wives) but our ultimate exploits add an element of excitement (and dread) to our wagers. And it's worth the risk to see the other guy decked out in just his red long johns.

Humiliating for me, RC won our next two "sure thing" wagers. He first required me to ride around town on my bike for one hour on a bright, sunny day in my red union suit. The following year the loser of our third bet, namely me, had to jog around a popular city park for one hour in that same long red, drop seat, underwear. Dang, I had to start winning.

So with some trepidation last August, I approached RC with another bet. RC is a "dyed in the wool" (red, of course) Denver Broncos fan. Like other avid football fans, he lives and dies for his team. So, when I told him the Broncos were going to crash and burn in 2017, naturally he took offense.

"No way!" he insisted. "They may not make the playoffs this year but they will do alright,"

"The ponies will lose ten games this year" I retorted, "wanna bet?"

Well, he wasn't ready to put his money, er union suit, where my mouth was, so he declined. At the end of September, however, Denver had won all four of their preseason games as well as three out of four regular season games. Seven wins, one loss. RC came to me to ask if I still thought the boys would lose ten games.

"They are bound to," I said, "look at their offensive line and the first year coach doesn't even know which of three quarterbacks to use."

RC with fire in this eyes was ready to bet. We shook hands and the wager was on. Well, the Broncos lost ten of their next twelve games and ended the season with five wins and eleven losses! RC's "sure thing" lay in tatters like grandpa's underwear. And speaking of underwear, he knew a union suit was in his future!

Despite huge disappointment like Denver fans everywhere, RC owned up to my win. After work, we met for a couple of beers.

"Hmmmm, Let's see now. I know, how 'bout grabbing a skateboard and moseying over to Elway Park in your long johns. Join all those school-skipping, pants sagging teenage boarders for a fun afternoon?" I mused.

"Oh, man. I haven't been on a skateboard since I was fourteen... a long time ago. I'll break my neck. Besides, where am I going to get a skateboard?"

"You'll figure something out."

Based on our history, RC knew it was useless to argue. Public humiliation and a bright red union suit were in his future.

Cold weather and the flu delayed my friend from fulfilling his obligation right away. But eventually, he was well and the weather warmed up into the mid-forties. After checking prices on skateboards and knowing even if he didn't break something he would most likely not be skating again, RC borrowed a skateboard from his all-too-willing nephew.

Bravely dressed in his union suit and tennis shoes, a skateboard tucked under his arm, and accompanied by a half dozen friends, RC headed for the park. A perfect sun-drenched day found my friend once again settling a "sure thing" wager in his underwear!

Bailey of Grand Rapids, MI emailed me with this photo and note: "It seems that RC is not the only guy to skateboard in his long underwear. Check out this kid in his red union suit and ready to jump on his skateboard. This looks like fun. I think I will try it." 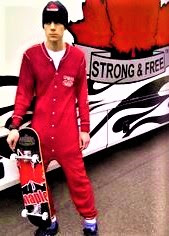 Bailey:  You try it!  Then send me your skateboard photo(s) and I will post along with these dudes! ....Chris