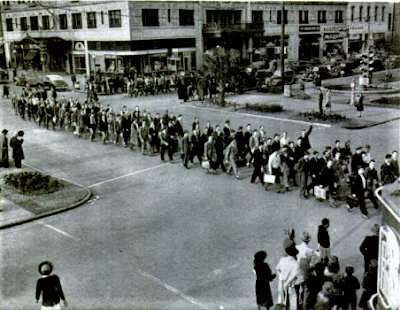 Seventy six years ago this month thousands of young men reported to recruiting offices all over the United States volunteering for duty after the attack December 7, 1941 on Pearl Harbor, Hawaii. It was reported that 2,000 men per day joined up within two weeks of the attack. After being sworn in most of the boys loaded onto troop trains to report to navy and army boot camps.

One such movement of recruits was by the “Central of Georgia” train which ran on the Florida-Georgia line in southeast U.S. The Life Magazine issue of January 5, 1942 featured an article and photographs of new recruits who had reported for duty in “Life Goes Riding On A Navy Recruiting Train.” 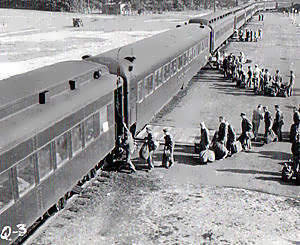 On December 17, 1941 the Central carried four extra coaches for 188 newly enlisted boys primarily from Macon Georgia having just been sworn in, each of “his own free will.” They were destined for an over night trip to the Navy Training School in Norfolk, Virginia.

Life reported that the boys “wore cheap clothes.” And that as soon as they got on the railroad cars, most dispensed with their jackets and took off their shoes for the long night ahead.

One eighteen year old stripped down to his white union suit and socks figuring he would eventually get a comfortable good nights rest. Life reported that this recruit dressed only in his underwear "looked like an apparition from an ancient chic sale joke book, ready for all kinds of weather.” Rolling up his sleeves and placing a hat on his head for comic relief, the boy walked up and down the train cars jostling with his fellow recruits and breaking the ice on what was probably an anxious trip for the boys, many away from home for the very first time.

The train was not the cleanest transportation as evidenced by a dirty floor and the dust very evident on the rear of the boy's long johns.

While he gallivanted around the train in his union suit, other boys played cards, read comic books, or wrote letters to sweet hearts left behind. Some studied war maps and read from the helpful pamphlet, “Helpful Hints to the Navy Recruit.” 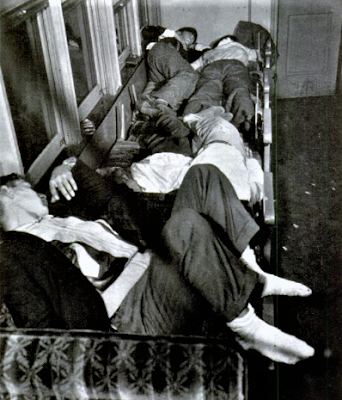 As the night wore on, the boys turned the seats side ways and slept three to four, side by side. At least one kid was reported to have slept up in the hat rack.

The recruits were fed in a crowed dining hall in shifts. Life reported that "the boys were cheerful but tired" after their full day of arriving pre-dawn at the recruiting office, marching to the train depot, boarding, and making the journey to Norfolk.

Eventually, the recruits arrived at their destination to begin a new chapter in their young lives. It is assumed that the boy in the dusty long underwear dressed before joining his fellow patriots in de-boarding the Central of Georgia. Many of these young boys would not return to their homes. God bless all the brave young men who protected our freedom then and to this day.

My thanks to Joe of New York City who researched and pinpointed this Life Magazine article for me....Chris