When Sam of northern lower Michigan drives around on his tractor clearing snow in 25F degree weather he dresses head to toe for warmth...just what you would expect from someone who lives in cold country. Reportedly, his Michigan winter wardrobe consists of:

A knit cap from Carhartt,
Gloves from Custom Leather Craft,
Boots from Muck,
And Combinations manufactured by Stanfield's: 2 layer cotton/poly/wool.
Not seen are his white Foxriver socks.

Does this guy know quality or what?! Sam wanted me to know that “the legs of the union suit were tucked inside my white socks which are not noticeable inside the 15 inch boots.” So noted.

Upon receiving his photo I replied, “Glad you're wearing a grey union suit as your white ones would have blended in with the snow and we couldn't have seen you!” And added, “You should send this photo to Stanfield's along with the motto: "I don't need a heated cab, I'm wearing Stanfield's!"

He replied, “Chris, Stanfields might appreciate the photo and motto but I might be in trouble with John Deere because the majority of compacts they sell around here are sold with cabs.” Yep, ok.

Sam tells me, “For almost all of my many years I was attracted to the union suit. My oldest brother wore unions (16 years my senior) but the next three brothers wouldn’t be caught in one, next two sisters, and by the time I came along my mother figured it wasn’t worth the fight so I put on what was there and it wasn’t a union suit.
Most of the boys that attended my two room school (K through 7th grade) were union suited and I couldn’t see why they complained. I finally took the plunge in 1962 while stationed in the Tucson, Arizona area. It could get might nippy at night out on the flight line and I got tired of crawling under an MD3 power unit to stay warm so off to Sears and there began the journey.”

(So many of us began with Sears Union Suits!  I did...Chris) 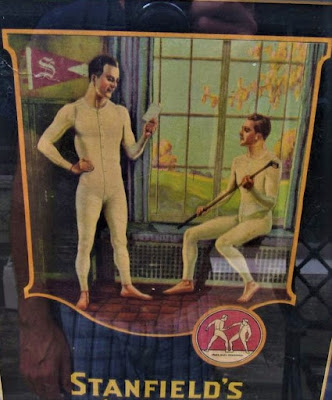 Sam is a fountain of knowledge when it comes to one-piece underwear. And so, he is my “go to guy” when it comes to union suits. After he read my posting of April 27, 2017 entitled Union Suits – YesterYear Stanfield's Canadian Union Suits, Sam emailed to correct my faux pas: “Canadian one-piece underwear, including Stanfield's, are called “Combinations” not “Union Suits!” He informed me that in Canada you don't ask for “union suits” you ask for “combinations” or “combinaisons” if you are French speaking. He emailed me copies of Canadian underwear catalogues to prove it. Furthermore, this fact is supported by two new email buddies of mine, Mario, who resides in Montreal, and Michael who hails from England. Those boys wear "combinations." I thanked Sam for setting me straight and immediately changed the posting to reflect “Combinations” rather than “Union Suits.”

Sam has over the past months tried to get me to quit wearing boxer shorts under my union suits and to stuff the legs of my long underwear into my socks. Dang, if I am having a hard time following his suggestions. Oh, yeah, he has a disdain for red union suits (my favorite). He wouldn't be caught dead in them! But Sam, grandpa told me red union suits are the warmest a man can wear. He swore, “They keep my gout from getting worse! You wear red, my boy!” I know Sam ain't gonna buy that one. He says, “I get the impression that I am alone preferring anything but red, although I am not throwing rocks.” Don't tell Sam but I hear from plenty of you who prefer “anything but red.”

Sam also has warned those of us who wear two union suits at a time (or a combination of combinations) on those coldest winter days to take care to wear the same type of long johns. In other words, don't wear a drop seat union suit over one that has the one-button vertical flap or you could be in deep trouble. Good advice if nature calls in a hurry.

Since Sam wears union suits year around like a number of you, long sleeved, long leg union suits don't work for him as summer underwear. For the warmer months, he turns to short leg, sleeveless Athletic Union Suits. But that is a story for another, warmer day.

Sam observes, “Now as to the State of the Union Suit. So much of life I find is like public transportation, if the ridership is down common thinking says reduce the service and raise the price, so it is with union suits. As it was until the mid-1970s most union suits for adults were sized by chest measurements 32, 34, 36, ... 52, and the standard trunk* link was chest 34 trunk 60 inches, chest 36 trunk 62 and so on. There were also allowances for exceptionally tall or stout persons. The standard also had a vertical wide lapped seat which allowed for all to hang out without fouling the suit. The above design allowed for a comfortable well-fitting garment. The five sizes we have today leave a lot to be desired along with the vertical button holes, the split seat, and the shortage of white suits. If I remember correctly, Duofold was one of the last to leave the chest measurements and that happened when it was bought out by J E Morgan which was a division of Sara Lee baking company. So you can say a cookie baker put the last nail in the US Union Suit coffin.”

Amen, brother. I told you Sam is my “go to guy.” Thanks for your comments and emails this past year, pal.


* Here's a mother measuring her son for a new union suit. Notice the tape is wrapped around the boy vertically. This measured his trunk to ensure a well fitting union suit of which Sam speaks. 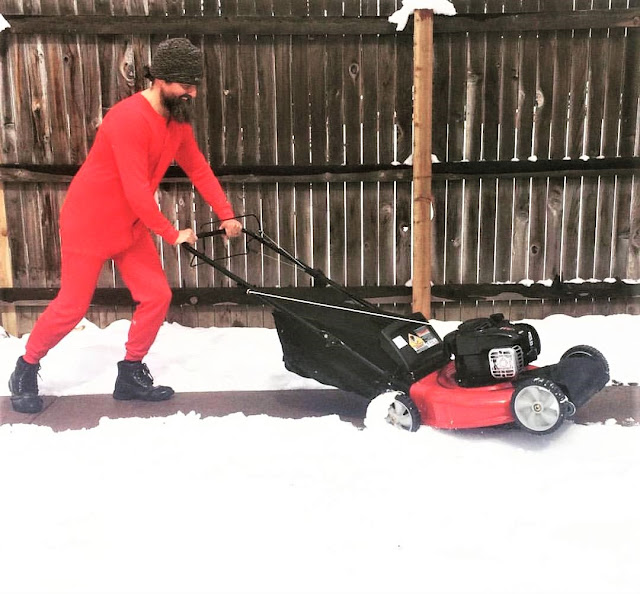 Just Received and added March 28, 2018: Ben of Frewsburg, NY sporting a red union suit in, of all places, the box of his Gehl Scaventer manure spreader. Courtesy of Duluth Trading Company, Duluth, MN. Another hard-working farmer! 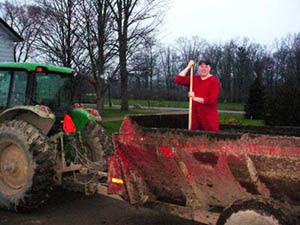