One problem with hanging out clothes in the winter time is that they can freeze. Like anything else when the temperature drops below 32 degrees Fahrenheit, wet clothing tends to get stiff as a board. Take union suits for example. Long one-piece underwear is roughly the same size of a man or boy except, of course, without a head and feet. Upon freezing outside in cold weather they become rigid. It takes hours for that underwear to thaw out enough to become warm and soft for wearing. 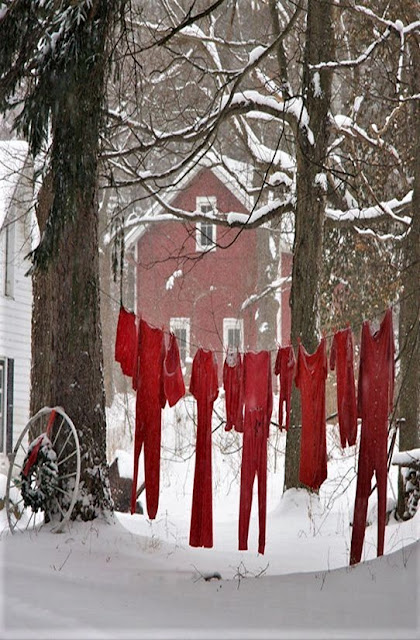 Frozen union suits are comical, don't you think? Point of fact. By the time I was a senior in high school I owned four or five union suits. I wore them from the first frost in the fall until the flowers bloomed in May. My mom, bless her, would occasionally leave our clothes out on the clothesline a bit too long in the winter time. 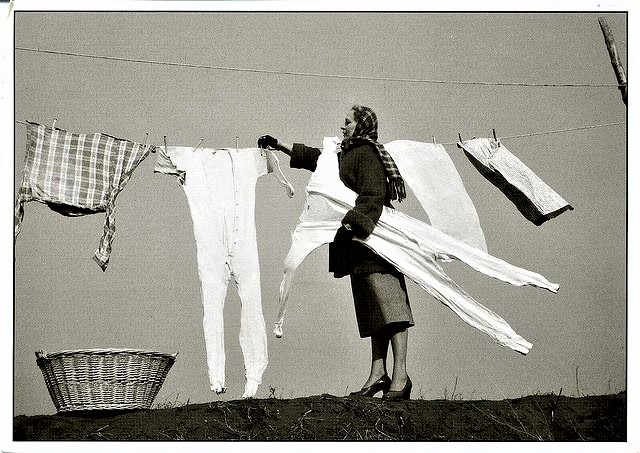 My brothers who wore two piece long johns at the time really got a kick out of my one-piece underwear. They especially thought that button flap in the rear was hilarious. In the winter time when my union suits were left out in the cold until frozen, one brother in particular enjoyed manipulating the underwear into various human-like positions. Once he set one of my union suits on the sofa and bent them at the waist just so and again at the knees. He pulled one leg up and crossed it over the other one. That darn garment looked just like a headless boy sitting there relaxing in his underwear. Another time he propped up my union suit at the kitchen sink with the arms extended forward as if that underwear were doing dishes all by itself. One cold day that irritating brother of mine stood my union suit up -at attention- out on the front porch saluting all the neighborhood cars that drove by!

One bleak day I came home after dark exhausted from basketball practice. Well, practice had not gone all that well for me and I was in a foul mood. My mom, dad and brothers were already at the dining room table eating. In my chair was one of my frozen stiff union suits, formally seated, erected with the arms resting up on the table on either side of my plate. Those hungry long johns were about to devour my roast beef. For a moment the family sat there stone-faced before all bursting out laughing at my astonished look.

Shaking my head, I headed to the bathroom to wash my hands and prepare for dinner. I then returned to the dining room but not before I had undressed down to my union suit and socks. Straight-faced, I picked up those stiff, impostor long johns from my chair and leaned them up against the wall, still in their sitting position. I then sat down in my long underwear to eat while joining in with my family's laughter that lasted through the meal. My bad day actually turned out much better. Laughter really is the best medicine even when one is the foil!

When we got up the next morning my human-masquerading union suit had thawed and was laying on the floor in a heap.

Over the years my little brother couldn't think up enough pranks using my stiff ole union suits. I mean that kid was always up to something. As he got a little older though, he too chose union suits for his winter underwear, his pranks soon diminishing.