As a boy I loved comic books of all kinds and especially those featuring Super Heroes: Superman, Batman, Green Hornet and even Mighty Mouse. One fortunate day my mom's kid brother, Carson, brought over a large box of comic books for me. He had out grown them for he had just graduated high school and had joined the navy. Praise the Lord for his generous gift! Wow, I was in boyhood heaven. The box contained a scattering of popular super hero comics, science fiction, humor, some girly / romance comic books (which my mom quickly confiscated), and a number of comics featuring a super hero I had never heard of. He was to become my favorite super hero of all time. His name was “Supersnipe.” He was a little boy with big ambitions for fighting crime. Best of all he was twelve years of age, the very same age as me.


Supersnipe came into being from the imagination of “The boy with the most comic books in America.”

That boy was really an ordinary kid named Koppy McFad. Ordinary in every way except that he had an extraordinary imagination. Koppy had read so many comic books (“he reads ’em, breathes ’em, and sleeps ’em”) that he turned into a costumed super-hero himself.


An eventual series of comic books were marketed under that phrase. Supersnipe was created by writer-artist George Marcoux and published by Street & Smith from 1942-1949. Koppy sometimes partnered with another boy, Ulysses Q. Wacky, who was described as an “inventor and genius unlimited.” Koppy's character first appeared in issues of Shadow Comics, beginning with Volume 2, Number 3 and later in Army and Navy Comics. Supersnipe appeared in a total of 44 issues before ceasing publication in 1949. It is believed that this comic book was the first to deal with comics themselves.

Thematically, Koppy read hundreds of superhero comic books, daydreaming that he had interactions with heroes and villains. 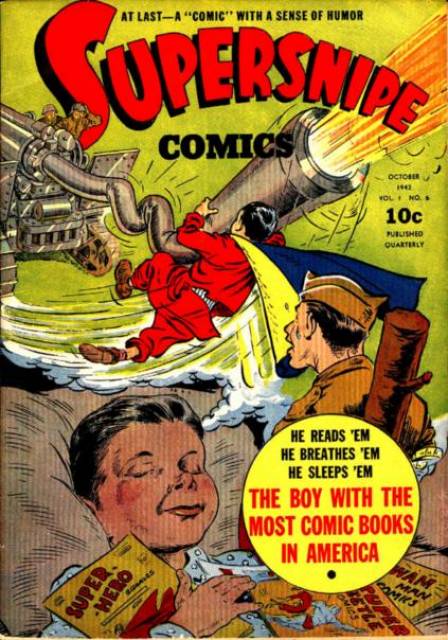 His daydreams eventually turned into action. He decidedly sought after and attempted to crush evil-doers right in his own neighborhood. The villains were many and varied. Koppy began calling himself “Supersnipe” after he saved a neighborhood scientist from disaster. No one believed a mere boy had attained such a feat of strength and courage. Even his best friend, Ulysses, didn't believe in Koppy's hero status. Why he had never heard of a boy of such renown and wouldn't have believed it if he had. That did it. When Koppy didn't receive credit for heroic deeds, he decided to adopt a costume that would proclaim to the world that he was a true super hero.
He deserved his self-proclaimed super title. Now he decided he should look the part. But how? His shirt and pants looked just like the clothes of all the other boys in town. He didn't stand out at all. His ordinary clothes were not worthy of a great fighter of crime. He must be easily recognized for the hero he was.
He decided to approach his wise grandpa for help in choosing the right look. Grandpa suggested the boy start with a super hero costume fashioned from a pair of long red flannel underwear. He told Koppy that he could spare one of his union suits for fighting crime. A mask and his father's blue legionaire cape were added to complete the costume. But it was that suit of red long underwear, borrowed from grandpa, that was just the ticket to set him apart. Supersnipe would finally get the recognition that other super heroes enjoyed. 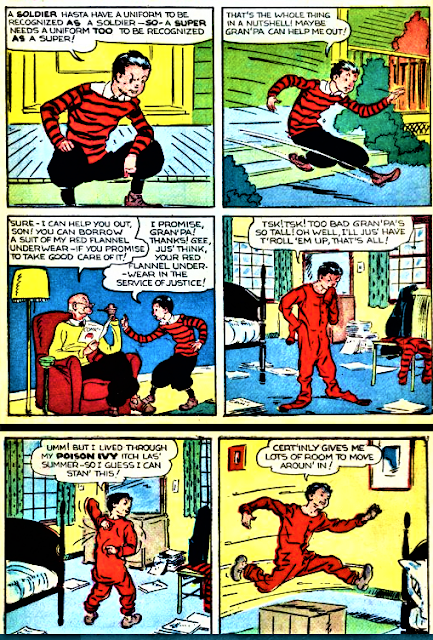 He soon discovered that Grandpa's Union Suit was itchy and too long. But it would have to do! 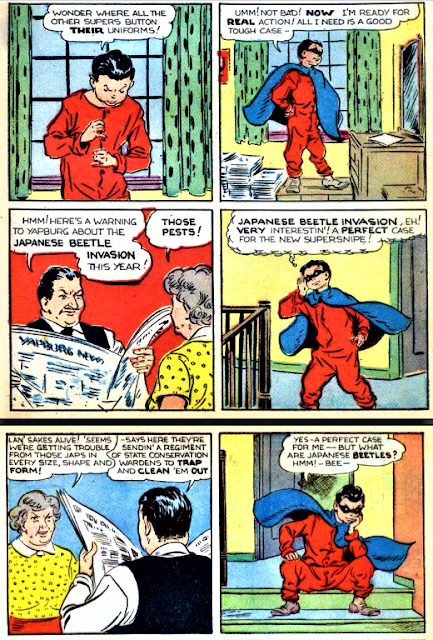 From that day forward the boy would don his red union suit, throw on the cape and mask and ta-da, instantly become Supersnipe. 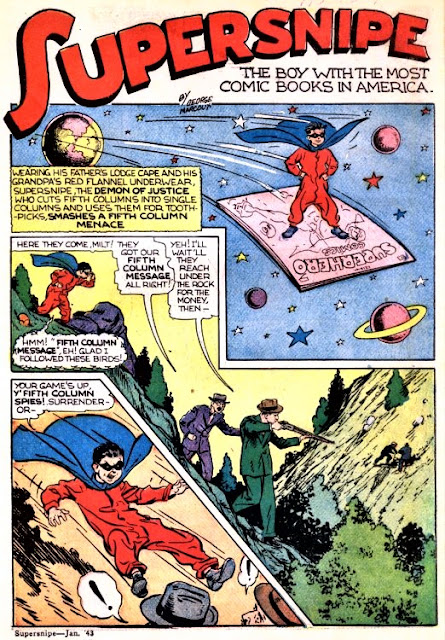 As I said, Supersnipe became my favorite super hero. I wanted so much to emulate him that I would run around the house and yard all day wearing long underwear myself with a towel tied securely around my neck, fighting the neighborhood bad guys.


Thanks, Adam. I can see why your younger self identified with Supersnipe. What fun!

Future issues of Union Suit Fan will continue to include Supersnipe comic pages at the end of my postings....Chris