The Calendar Might Say Spring but Mother Nature Insists That It's Still Winter in the Northeast!


Hi Chris....  I'm a union suit newbie. I don't know how or why I never tried them any earlier in my life but now I am 100% sold on them; they are about the most practical and comfortable undergarment you could ever want, at least in the cooler times of the year. I got my first taste with the two layer wool/cotton Stanfield's and can't imagine trying any other brands; these just seem so well made.

I'm attaching a picture from yesterday of two of my Stans out on the clothes line. It was a good drying day and the snow is receding some (at least until tonight) so they didn't freeze up solid, lol.  My house is 104 years old so I would imagine that in it's earlier years it would've been pretty likely to see a few union suits hanging out in the same location. Best regards, Mike

Thanks, Mike, for the photo and email.  I suspect that after 104 years a few prior inhabitants of your home and users of that clothes line wore a few union suits.

From time to time I hear from guys who have not worn union suits before even though their dads or granddads or other relatives did. Like you they become hooked on this type of long underwear. I appreciate you taking the time to be in touch. It's great hearing from fellow union suit fans, both new wearers and guys who have been wearing them for years. Stay buttoned!    ....Chris


Added April 6, 2019:  I received the following email from my good buddy, Arizona Stanley:

"In Logansport, Indiana, once a big railroad hub, my family had a house in town and the neighbors were all railroad workers.  So there were always at least 5 or 6 union suits hanging on the laundry line to dry – on both sides of our house. My grandfather always kept his union suit on and pulled a night shirt on over it to sleep in their very big farm house which only seemed to have heat downstairs.  Anyway, there were certainly a lot of men in Indiana who wore union suits every day – I’ll bet hundreds of those railroad dudes wore them every day – either under their railroad uniform or bib overalls.  And I suspect that here where I live now, a major copper mining town with underground work, there were a lot of unions suits being worn back in the 40’s and 50’s.... Stan"

Standfield's, Canadian manufacturer of Combinations has just started a new ad campaign called Strong and Free.  They adopted this from "a passionate statement from the Canadian Anthem. It represents the Canadian spirit of compassion, honesty, integrity, and our strong support of the rights and freedom of all humankind."  The following is from their underwear campaign featuring long-handle combinations hanging on a clothesline up north: 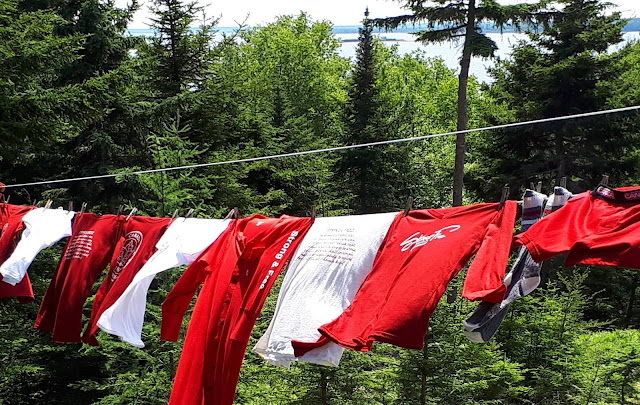