My Story: Tailor Made

Whatever happened to low dollar, affordable union suits? I can remember paying five and six dollars for union suits back in the late 1960's and early 1970's. So many department stores sold them then. There was a store right around the corner from where I lived that sold a variety of long underwear. I purchased several union suits there over the years. They came in boxes of six suits or so, each wrapped individually. 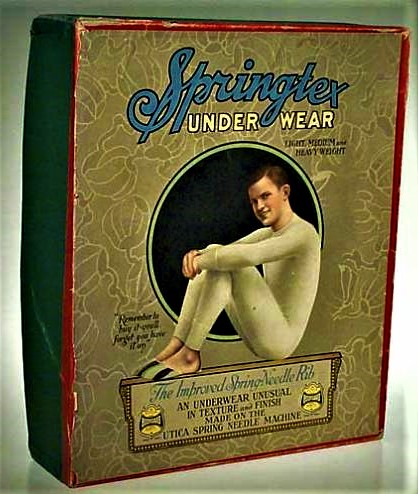 There was a tailor shop I remember fondly in downtown Buffalo, New York which I happened to notice one cold day while waiting nearby for a bus. I looked in the window and decided to go in and warm up. The shop was owned by an elderly man and his wife. He tailored custom suits and his wife did alterations. I wanted to know if by chance he sold union suits so I asked. The owner was not especially friendly at first. Maybe he thought I was just joking about my willingness to buy one. It turned out though that he did sell the one-piece, button-down underwear I was seeking.

I told him I wore union suits often but didn't happen to have one on that day. His whole demeanor changed when I convinced him that I intended to buy one. 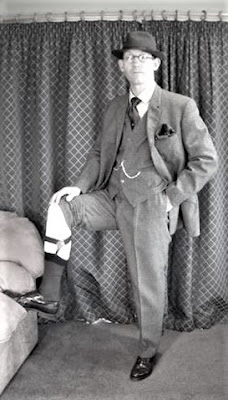 He placed one of his legs up on a chair and raised his pant leg to the knee to show me that he wore union suits as well. No doubt he came from the old country and probably wore union suits summer and winter all his life. Turns out we were fellow union suit wearers! Not too surprising as this was Buffalo, New York after all.

The tailor's stock had to be really old because the long underwear he showed me came in boxes but was not in shrink wrap. I picked a union suit that I figured might fit me. He looked at me surprised when I informed him that I planned not only to buy one but that I wanted to wear it home that very day. I told him that I frequently rode buses around town as I had that day. It would be a long, frigid wait at the bus stop when I left his shop and I did not intend on freezing. I asked where I might try on the underwear.

He wanted to know if I had ever been measured for a union suit. At the time I was a young man of twenty-two just out of the service. Although I had been wearing union suits for years, I didn't know a thing about being sized for long underwear.

So at his instruction, I undressed down to my underwear and he measured me right there in his shop. He meticulously measured my waist, chest, inseam, and trunk. This tailor must have measured countless men and boys over the decades. So measuring me for a union suit was second nature to him. He jotted down my measurements, did some figuring, and then recommended just the right size. He placed the union suit that I had chosen back on the table and handed me a better fitting one. He directed me to a private room where I could put it on.

As I was buttoning up the union suit he walked in and asked “how does it fit?

With me standing there in my new long underwear, he looked me up and down and pronounced, "You'll be good and warm now!"

After I finish getting dressed, I paid him and turned to leave. I waved goodbye to the gentleman tailor and his wife as I walked out the door toward the bus stop. He not only warmed my body that day but my heart as well. What a kind old gentleman he turned out to be.

Several times I returned to his tailor shop. I purchased a new union suit or two every year. One day I returned intent on buying another union suit but the shop was empty. Had he retired, sold out, died? I never found out. And so it goes in life.

My time there and the long underwear I purchased from him are now just a memory. I never did buy a tailored custom suit from him. I don't even remember now what underwear brand the union suits were but they were made very well. I'll never forget that early experience and my affection for that old man who himself wore union suits and every now and then sold one or two to me and perhaps other well-measured men.

Thanks to my very good friend and true Union Suit Fan, Rich, for contributing his early experience.... Chris