Recently, I received an email from JT, a new viewer of my blogs, Union Suit Fan and Union Suit Fans in the Limelight. He said: “Great blogs, very interesting and entertaining. I have read all of your postings and I wanted to add to your 'Cowboys in Union Suits' section...”

JT tells me that he has worn union suits since high school. “Being raised and working full time on our ranch in northern Nevada, I looked up to the other cowboys. I noticed they all wore red union suits as I could always see them under their collars and when their sleeves were rolled up exposing the comfortable red layer. It was then I realized I needed a pair.” JT purchased his first union suit from a local ranch store and experienced the “warmth, comfort and practicality for himself!”

Of course, he admits he couldn’t have just one and soon had a pair “for every day of the week.” He discovered they were great not only for cowboying but for skiing, hunting, feeding cows and, later, working in the shop as a mechanic.”

JT tells me that he too was the brunt of many jokes but that he wasn’t the one freezing on those cold Nevada high-country winter days. “It was all in good fun and soon my buddies were asking where I got my union suit! Any good, hard working man should wear a union suit. Now many of my buds, well, it’s all they wear and red is the most popular color. It’s more common than one would think among guys in my thirty-something age group even though they are an old fashioned style. I have my own style and a union suit is part of that!”

JT and the boys come in from work at the end of the day and gather in the bunkhouse in the evening for a meal, good conversation, and sometimes music and cowboy poetry. "Some of us would remove our shirts and some would just be lounging in their union suits and boots, some with hats still on and a wild rag around their neck! It was the time of day for relaxing around the old wood stove and passing the whiskey around.” According to JT, they wear their long underwear well into spring as snow and frost are common as late as June in northern Nevada. 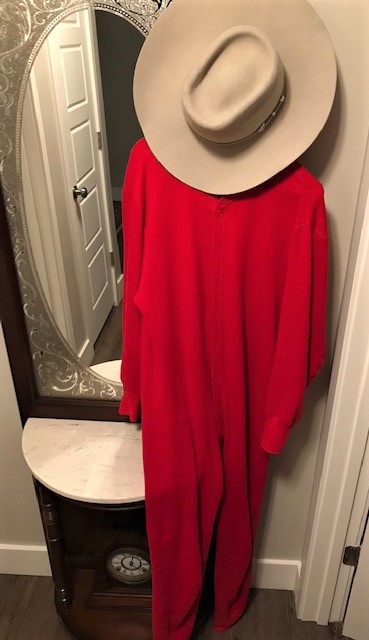 “My favorite union suits are JE Morgan Arctex, Carhartt and Duofold in red, of course. The Arctex union suit is no longer made but can still be purchased new if you keep your eye out for them. That one is very warm, fleeced on the inside and yet is not bulky or heavy. Yes, I tuck my union suits into my socks and no, I do not wear boxers underneath, it’s the cowboy way!”

“Thank you for considering my story as I too am a 'Union Suit Fan.' Keep the stories and photos coming, we all look forward to reading about it. Keep the spirit of the Wild West alive! … Regards and YeeeHaaw!! ...JT, Owyhee, NV”


JT: It's always fun and meaningful hearing from Union Suit Fans across the USA and the world actually. For example, I heard from Scott of Melbourne, Australia this week. With winter coming on “down under,” he's looking for a drop seat union suit to purchase and wear.

So, thanks pal. I much appreciate you taking the time to email me your story with union suit photos to share. Yours and others help make this site the “premier family entertainment go to” union suit blog that it has become.

On a personal note, I have to admit being envious of your Cowboy Life. Since I was a little boy I wished to be a real cowboy. My little friends and I would run around all over the neighborhood playing “cowboys” wearing guns in holsters, chaps and, of course, cowboy hats. I couldn't wait to get my first pair of Wrangler jeans. I had a play pump-action rifle with which I shot many a bad guy. I come from a long line of farmers but it was a wild west, bronc riding cowboy that I wanted to be! But twas not in the cards. You could count on one hand the times I have ridden a horse although my wife is a big horse fan, rider and trainer.

As a young boy, I wore two piece thermal long underwear but not union suits. I didn't get my first one until I was fourteen years old and then I was a little old to be playing “cowboy.” Now, like you, I wear only long one-piece button-down underwear and then for most of the year.

Although I remain a kid at heart, since becoming an adult, I have come to know that being a real cowboy is HARD work! Again, JT, thanks to you for being a viewer of and contributor to Union Suit Fan! Give my best to the boys in the bunkhouse ...Chris