As I am sure you know by now, the famous counter-culture movement held on Max Yasqur's dairy farm outside of Bethel, New York was known as Woodstock. That was 50 years ago this weekend. Perhaps you are old enough to have gone. Woodstock was billed as "Three Days of Peace and Music."  Numbers vary but at least 400,000 kids attended to listen to a variety of rock bands and musicians, and of course smoke pot and experiment with mind-altering drugs.

Not sure if this hippy attended but seeing him in this tied-dyed union suit makes me think he could have. I believe it was too hot there that summer (at least until it started to rain heavily) that few, if any, attendees wore union suits. But maybe this fan did. 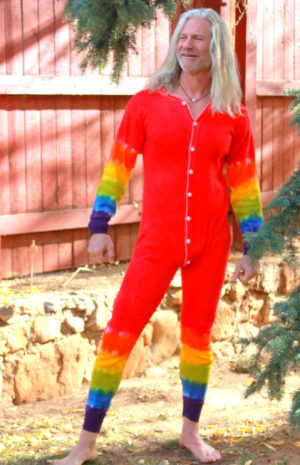 So did you attend this event? I know of only one person who did. She accompanied the band, Jefferson Airplane, stayed behind the stage and did not get high on anything. The band performed at 8:00 am on the third day.

Boyd of San Francisco emails:  Chris: as an old hippie (literally) I can say with a great deal of confidence that there were no union suit wearing kids at Woodstock. I'm willing to bet that most of the "counter-culture" participants didn't even wear underwear! Too bourgeois!!

Even though I wasn't at Woodstock, I was a child of the 60's. Who can forget the "Summer of Love" (1967). It has been reported that 100,000 young people from all over the U.S. converged on the fine city of San Francisco from 1967 through 1969. I was one of them and have never left. Fashion was wildly colored clothes, bare feet, and no underwear. My dad, brothers and I always wore boxer shorts (well, one brother wore briefs). That is until I arrived in Haight-Ashbury at the age of 17. I promptly discarded my boxers, donned faded blue overalls, and wore sandals or went barefooted. I ended up with the nick-name "Boy," short for Boyd.

We did have one kid in our "commune" who wore a white union suit much of the time since it was (and is) generally cool in San Fran. But he was the exception. We called him "Union," of course. And one boy I remember always wore jeans with the seat torn out so he did wear brightly printed boxer shorts. But they were the exceptions in our group. Most of us went commando, boys and girls.

Like most kids, I left the counter-culture movement a few years later. I got tired of being dirty and hungry. Fortunately, I did not die of an overdose and I guess my brain is not too fried. And, horrors, I went back to wearing boxer shorts and regular clothes. And in the cool winter months I even wear union suits which for me are very warm and comfortable... Boyd

Good for you Boyd aka Boy. Thanks for sharing...Chris


Added August 23, 2019 / Rich of Buffalo, NY (not all that far from the farm outside of Bethel) sent me his take on Woodstock and the music of the day:

Chris, I did not make it to Woodstock. Perhaps two weeks before it started I left Vietnam with the 9th Infantry Division and landed in Hawaii where I would end up spending the next 14 months. It was a great place to spend time. Of course I heard all about Woodstock before as it was taking place, and the music was certainly a big part of my life. At the time of course, I had to toe the line in the army but once I got out I became one of those guys with long hair and tie-dyed. And to this day, I'm still listening to that music.


Of course Vietnam and Hawaii are not the places where you usually wear a union suit and I didn't, but after those days and I was back home in Buffalo, I came home in late November and already it was getting cold especially after being in tropical places. So it wasn't long before I bought a couple union suits. In those days union suits were sold just about everywhere. One place that specialized in men's work clothes had boxes of union suits and I remember I bought a Spruce thermal union suit that I tie-died myself. It was a big hit with my girlfriend I remember.


And here I am fifty years later and to this day there is nothing like slipping into a union suit, tie-dyed or not. Especially on those cold winter days when you can relax and listen to a little Creedence, or Crosby Stills and Nash, a little Jimi Hendrix....Rich

Thanks, Rich. Fifty years!  Where did all those years go?! Too bad there's not a photo of you in that tie-dyed union suit! ...Chris


More from Boyd of San Francisco:

Chris, I meant to add that unlike you I do not wear underwear under my union suits and I do not tuck the cuffs into my socks. You wearing boxers under your union suits is like wearing suspenders and a belt to hold up your pants... Boyd

Email added August 30, 2019:
While many kids enjoyed Woodstock back in 1969, I was in line that summer for processing like these recruits! And oh yeah, we wore underwear ... Steve, St. Paul, MN 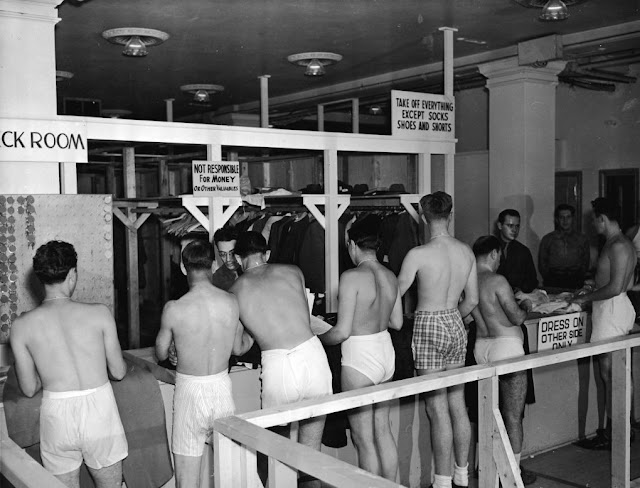 Yes, Steve, many boys were drafted or joined in those days to serve their country and do as ordered. Thank you and Rich and the millions of others who bravely served then and are serving today. We owe you guys alot... Chris 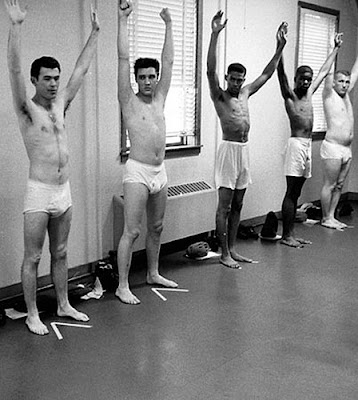