Growing Up, Part I
by Ron Payne, Guest Contributor 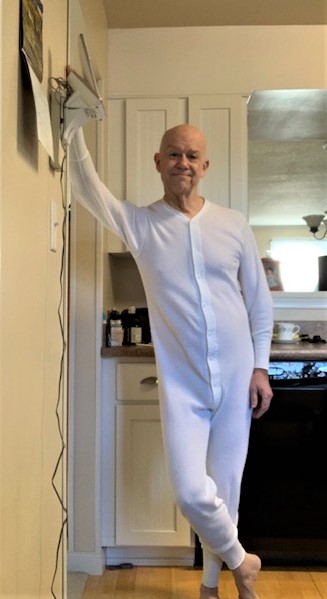 Growing up back in the 50's there were union suits in the inventory of clothing stores that served small towns and farming communities. I always shunned union suits as being too ridiculous looking when I was a youngster. But when I got into high school and was changing into gym clothes, I saw a few of the boys from the nearby farms wearing union suits without shame. They laughed at themselves and ribbed each other over their "hillbilly" long johns. But there also seemed to be an element of pride in wearing "country boy" underwear.

I grew up in Loudoun County in northern Virginia on a farm between Purcellville and Lincoln. My Dad wore two piece thermal underwear but no one I knew wore union suits. I'd only seen men in union suits on TV or in the movies and it was always associated with comical humiliation. Like John Payne in "Restless Gun" when masked men held him up and made him strip down to his union suit. He had to walk into town in his one-piece long johns while the townsfolk laughed. But I saw union suits at the clothing store in Purcellville and, of course, there were the Sears catalog ads. Any type of long underwear seemed an embarrassment to me when I was a kid. So I avoided the thermal two piece type that my father wore, not to mention union suits. Being shy, I was afraid of looking stupid and having people laugh at me.

When I went to college I got my first union suit and really liked the way it felt when I was outside on a cold day. But I never wore union suits as my standard winter underwear until I took a job at a lumber and mill works for a while in the mid 70's. From November to early March most of the workers wore some sort of long underwear, and for a few of us, union suits were the long johns of choice. I experienced a bit of that same feeling the farm boys in high school felt. Sure, I looked kind of comical when I got home from work and stripped off my layers down to my union suit. But I felt a bit of pride that I was wearing the sort of long johns that generations of working men wore as part of their rural identity. 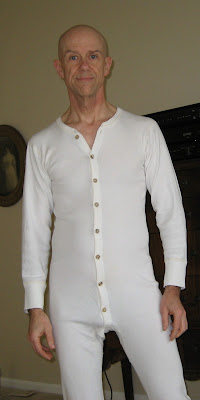 I ran across your blog while shopping for new union suits (I keep ripping them at the elbows). I now live in Alexandria, Virginia. Retirement won't be too far off and I can probably get back to wearing union suits all winter long. Today, as a white collar professional, I don't wear union suits every day as I did then. But winter weekends still provide me with an opportunity to don my favorite long underwear. I admit I enjoy feeling part of that fraternity.