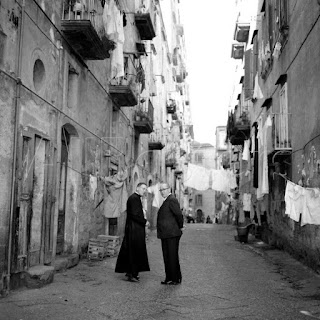 Here is a story I was told (and I have no way of proving it but it sounds true enough).

Back in the late thirties and early forties in New York City (the lower east side of it, in this story), the world was preparing to go to war. Everything was being rationed and that meant heat and fuel.  So, union suits (long handles/ gotcha's - historical fact: "Long Johns" wasn't coined until the late forties) became a winter necessity for guys. Whether indoors or outside, with no fuel heating furnaces, it was cold. I recall that in the early 50's seeing union suits sold in boxes. I don't know if they contained 3, 6 or a dozen but they were in boxes and on the front was a guy sitting in an easy chair, legs crossed, in slippers, a white union suit (heather oatmeal sounds fine and dandy but it was not an option back then) smoking a pipe. These were displayed in the windows of haberdasheries.

As I stated, all the boys wore 'em including our Parish priests. Churches then were barn-like big and impossible to heat under any conditions. Our church was next to our parochial school run by nuns. As a washing machine was a luxury and the clothes dryer had not been invented yet, the good nuns did the laundry for the priests - including the white union suits they wore to keep warm. Everybody on the lower east side hung their clothes out on clothes lines. In Europe - especially Italy - they still do.  I saw it last year but it was warm and seemed more in the bedding variety. So, after washing them, the good sisters of charity hung the union suits out on clothes lines strung high above the playground of the school to dry. It became a game, or so I was told, to try to figure out which priest wore which union suit. A short priest would probably be the proud owner of a small sized union suit while a tall guy had an extra long one/ a fat priest had a large one, etc.

Innocent days and probably a fun game too.

Today, most city boys would rather freeze then put on a good, old-fashioned, and reliable union suit or even two piece thermal drawers. Of course, their hero's are not John Wayne, John Payne (the Restless Gun) or cowboys. They think a guy in a union suit or long johns looks funny. Heck boys or any man stripped down to his underwear is going to be a comical sight - a union suit just covers a bit more ground and is of historical significance.

Thanks to Joe, another Union Suit Fan! 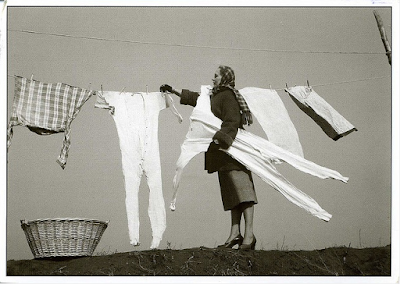 Speaking of Holy Underwear, your story of priestly union suits reminded me of our pastor's long johns and the consternation they caused when I was a boy. Although I wasn't aware at the time, stories still circulated about his wife hanging his union suits out on the clothesline on wash day. Reverend Barnham wore union suits year round to keep warm. Like me, apparently, he was cold-natured. As mentioned, dryers were not common in the 1940's, 1950's, and even into the 1960's. Every wife and mom in my small home town and probably across most of America hung clothes outside on the line including underwear.

Mrs. Barnham was no exception. It so happens that the parsonage (pastor's home provided by the church) was located on the corner of main street next to our church building. On wash day (Monday's), Mrs. Barnham hung out her wash right there for everyone in town to see. And there were her husband's and four boys' union suits hanging along with the family's shirts, jeans, socks, and the like.

Like the priests' variety, the family's union suits came in all sizes and a few colors. Now, as far as I ever heard, the boys' long underwear didn't appear to be scandalous to the community. But a number of the ladies at the church thought it most improper that the pastor's long johns were on display. As the story goes, the trustees' wives complained to their husbands and demanded that something be done about the good reverend's underwear.

Now being a man myself and having worn union suits since I was fourteen years of age, I can't imagine the trustees believing that this "scandal" was the most important item up for consideration. Why, they were men who most likely wore one-piece long underwear themselves and like the pastor put them on one leg at a time, followed by one arm at a time.

Nevertheless, the pastor was brought before the committee regarding this transgression. After all, the committee men must have wished to keep peace in their own homes. It was reported that the pastor looked each trustee in the eye, and laughed out loud. I have it on good authority that he exclaimed to those present, "let those among you who have not displayed your underwear on a clothesline in public cast the first stone." No stones were cast.

Apparently the situation, diffused with humor, allowed the trustees to move on to other more important items on their agenda. The pastor's union suits were not formally discussed in further meetings and his and the boys' underwear continued to be hung out on wash day.   ....Chris


Remember, if you have a union suit story or photograph to pass along to other Union Suit Fans, email me today:
cayersnd@gmail.com

The following was added March 16, 2017 - Photo and Article, entitled "Grandpa's Long Underwear," were sent to me by "Anonymous."    Thanks... Chris 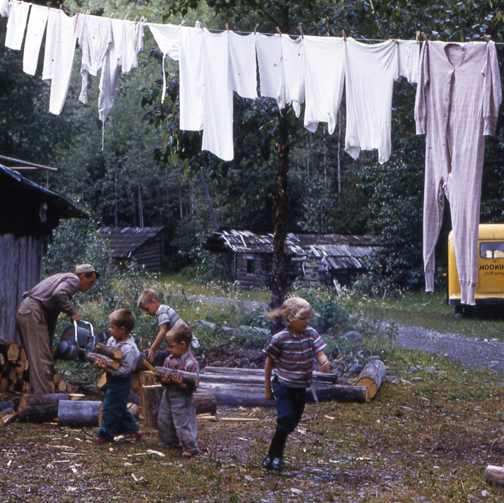 Growing up in the country, there was always laundry to be hung on the clothes line and I enjoyed doing that task much more than washing dishes and cleaning house. It was my time to get out of the house and meditate while I hung each article of clothing with just enough drape so that the entire basket would fit on the line to dry: socks, shirts, britches and, of course, underwear, the long one-piece, button up type with a rear trap door.
After I moved to town, I still hung up the laundry outside. When I got married, the first thing I did was to put up a clothes line in the back yard. I listened to my neighbors complain about the unsightliness of my family's underwear hanging on the line, but it didn’t matter. I enjoyed getting out of house, listening to the birds chirp, while I hung up the laundry. My husband bought me a washer and drier as soon as our first child was born and I appreciated it in the winter time, but if it looked like the clothes had half a chance to dry outside, then outside is where I took them.
Now grandad was my mother’s father and he always wore union suits. During the summer months, they were his pajamas and, in the winter time, you could see the top of his union suit under his shirt collar. So come laundry time, there was always at least one suit of long underwear on the line. In the winter when the clothes had to be dried inside, we would put them on hangers and hang them on the curtain rods in the kitchen. When Grandad died, I inherited his best pair of wool long johns and a soapstone carving. That union suit is still worn by my husband to this day and is still hung outside on the clothes line to dry!